The famous 2 photos made from a Torez apartment building which could show the smoke plume of a BUK missile, in fact shows two colours of smoke. A grey/black smoke plume which  stays close to the ground and a white plume which reaches a much higher altitude.

The cause of the black smoke was likely from a diesel locomotive and not from a BUK missile as stated by Bellingcat.

Update : At June 13 2017 Daniel of Bellingcat stated the black smoke could also be from a locomotive.

Both photos are combined in the animated GIF shown below.

There has been a lot of discussion about these photos. It is not clear if indeed a smoke plume of a BUK missile is seen.

According to Bellingcat contributor Daniel Romein, the black/grey smoke on the left of the photo indicates the first stage of a BUK missile launch.

¨Even the cloud of grey smoke characteristic of the first stage of a Buk missile launch can be seen in the 17 July 2014 pictures.¨

Contrary to Bellingcat, independant researchers Charles Wood and Michael Kobs both concluded the black smoke and the white trail could not be related.

Location of the black smoke

The location of the black smoke is very likely a source close to the Voskresenskaya mine . The image below is shown at Bellingcat website. The mine is the black area on the upper side of the image.

The black smoke originates from the area encircled by the red circle.

This is another photo showing the location the black smoke came from.

Two likely sources for the black smoke are:

These Panoramio show the mine. This one taken from a hill of the Kiselyov mine.

Russia Today reporter Yana Yerlashova made the photo below at June 7th 2015 from 2 Microrayon 3 flat in Torez. The same location as the two photos made at July 17 2014.

The photo shows a black plume as well! However I have my doubts about this Russia Today reporter. In the BBC documentary “Conspiracy files: who shot down MH17” she states the apartment of the plume photos did not have windows facing the area the photos were made. That is not true. There is a balcony.

A possible reason for the black smoke can be GRAD fire. There was a lot of heavy fighting south of Snizhne around mid July.

It could also be a truck or something on fire. The video below shows GRAD fire.

The black smoke could be caused by a non-moving diesel locomotive used for pulling railway wagons for transporting coal. Exactly in the point of view of the photographer there is the Voskresenskaya mine. This is the location on Google Maps. 48.019932, 38.688084

At the southern boundary of the coal mine a railroad can be seen. Using Google Earth and selecting various dates we can see that there is activity on the railroad. At some dates we see railway wagons, sometimes there are none. Google Earth image of July 16 2014 shows railway wagons and also a slightly different coloured object which is likely a diesel locomotive. Based on the fact that the railroad has a dead end at the easterly direction, it is likely we see a locomotive which, when it starts moving, is pulling the wagons.

Below we see the Google Earth image of July 16 2014. The upper side of the image is the south. The white line indicates the possible locomotive. 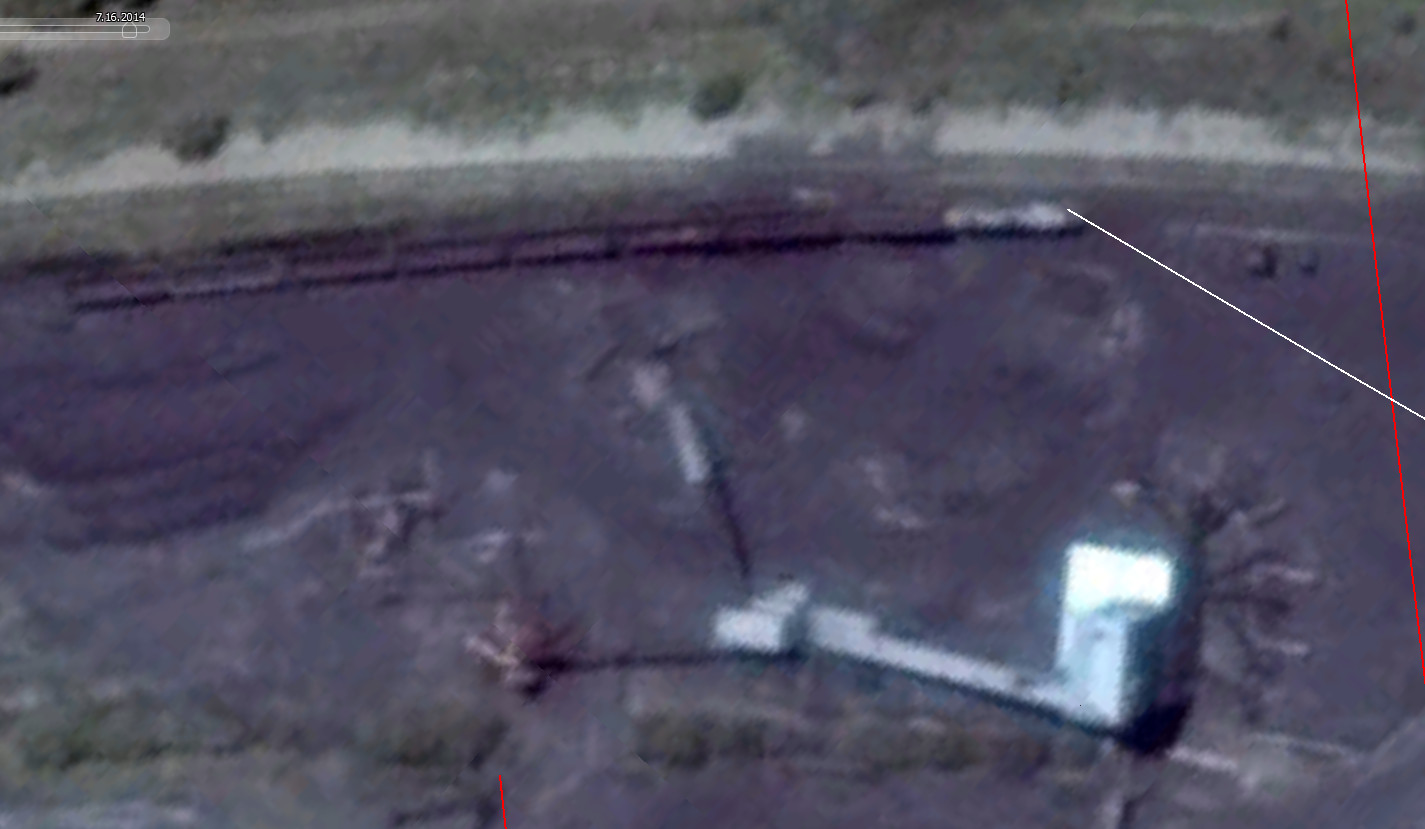 This website made by train spotters shows the locomotives in use in Ukraine. It shows many types of diesel locomotives. Particular interesting are  the type 2TE116 (2ТЭ116) and the 2TE10 series of locomotives. The 2TE116 is a twin-section freight locomotive, used in eastern Ukraine. It has a white coloured roof.

Also the 2TE10 serie has a white roof.

When searching on internet for 2TE116 we find this interesting photo showing  2TE116 or 2TE10 with a lot of black smoke.

The image was made by a Russian trainspotter in an area in Russia.

This video shows a 2TE116 with black some as well.

17 Comments on Was black smoke in “BUK” plume photo caused by a diesel locomotive?