In the meanwhile the pressrelease which was online here has been removed for unknown reasons.

An archive of the pressrelease can be found here.

A copy of the photos part of the pressrelease are here, and here

Ukraine ” Kyiv Research Institute of Forensic Expertise” recently carried out a missile explosion experiment to document the effects of a BUK missile explosion on an aircraft. The experiment was done in cooperation with the Ukraine Ministry of Justice for the MH17 criminal investigation.

The test had a number of objectives, such as:

In 2015 Almaz Antey, the manufacturer of the BUK system, carried out a similar test. AA used a part of a IL86 aircraft for the test. Journalists, nor experts of JIT or DSB attended the experiment for unknown reasons. Likely because nobody was invited.

On the photo below the man second from the right is wearing a short with logo of Dutch police. The man fourth from the right wears a shirt of AFP Australian police.

The pressrelease (copy here)does not say that Malaysian police attended the experiment. Which is strange as Malaysia is supposed to be a full member of JIT. The aircraft shot down belonged to a Malaysia based airline.

I requested the spokesman of Dutch prosecutor what the role of Malaysia is in the criminal investigation. Mr. De Bruin of JIT did not provide me an answer. See this blogpost. The pressrelease which can be read here (orginal was deleted, archive here) shows images of the experiment. We see two half circles of aluminium plates. In the middle some containers and what appears to be a wooden construction to hold the BUK missile.

Another photo shows the situation after the explosion.

JIT spokesman Wim de Bruin stated when asked that the so called arena test was carried out in the last two weeks (so from beginning of July to mid July). The reason this arena test was done only after two years since the shot down is that “forensic investigation is done in phases. The next phase can only be executed when information required for that test has been collected” according De Bruin.

The photo indicates by the writing on the left panel that the test was done around July 7, 2016. Which is interesting as JIT at June 3 2016 stated the first results of the criminal investigation will be announced after summer.

The EXIF information indicated the photos were made at July 13 2016. (source)

JIT suggested by the statement below that the delay was caused by Russia not yet supplying information.

In particular, these issues concern some points in the analysis of the forensic investigation and information which has been requested through several requests for legal assistance. The JIT is still waiting for information from the Russian Federation about BUK installations. The head of the Kiev Research Institute for Forensic Expertise, Oleksandr Ruvin, survived an assassination attempt when unidentified assailants attacked him in Kiev on November 19. (source).

The man in the blue shirt is very likely Oleksander Ruvin. The shirt has the Kiev Research Institute for Forensic Expertise initials on it. The white badge could show his name.

The Kiev Research Institute for Forensic Expertise played a major role in the investigation done by DSB and JIT. For example the institute made a calculation where the missile could be launched from.

Ukraine media reporting about the experiment here  and here.

The setup of this experiment is not clear. A poster at mh17.webtalk.ru suggested that various plates represent various parts of the aircraft. The plates indicated in green could be the cockpit. So far the construction does not make sense to me.

Interfax reported in english language about the arena test:

Everything necessary for modeling the explosion which caused the MH17 flight crash in the first arena test staged in Ukraine was made in Pavlohrad. Original live Buk missiles were assigned for the testing. A cockpit mockup and target layout elements were deployed on two separate platforms. Experts installed photo and video cameras and 3D scanning devices in the same spots.

The value of the test done by Ukraine is questionable. When AA concluded certain things based on their experiment the response of the Dutch Safety Board was that a test “performed in a stationary situation on the groud is completely different from the detonation of a warhead at an altitude of about ten kilometers”. See appendix L of the DSB “about the investigation” document page 97. 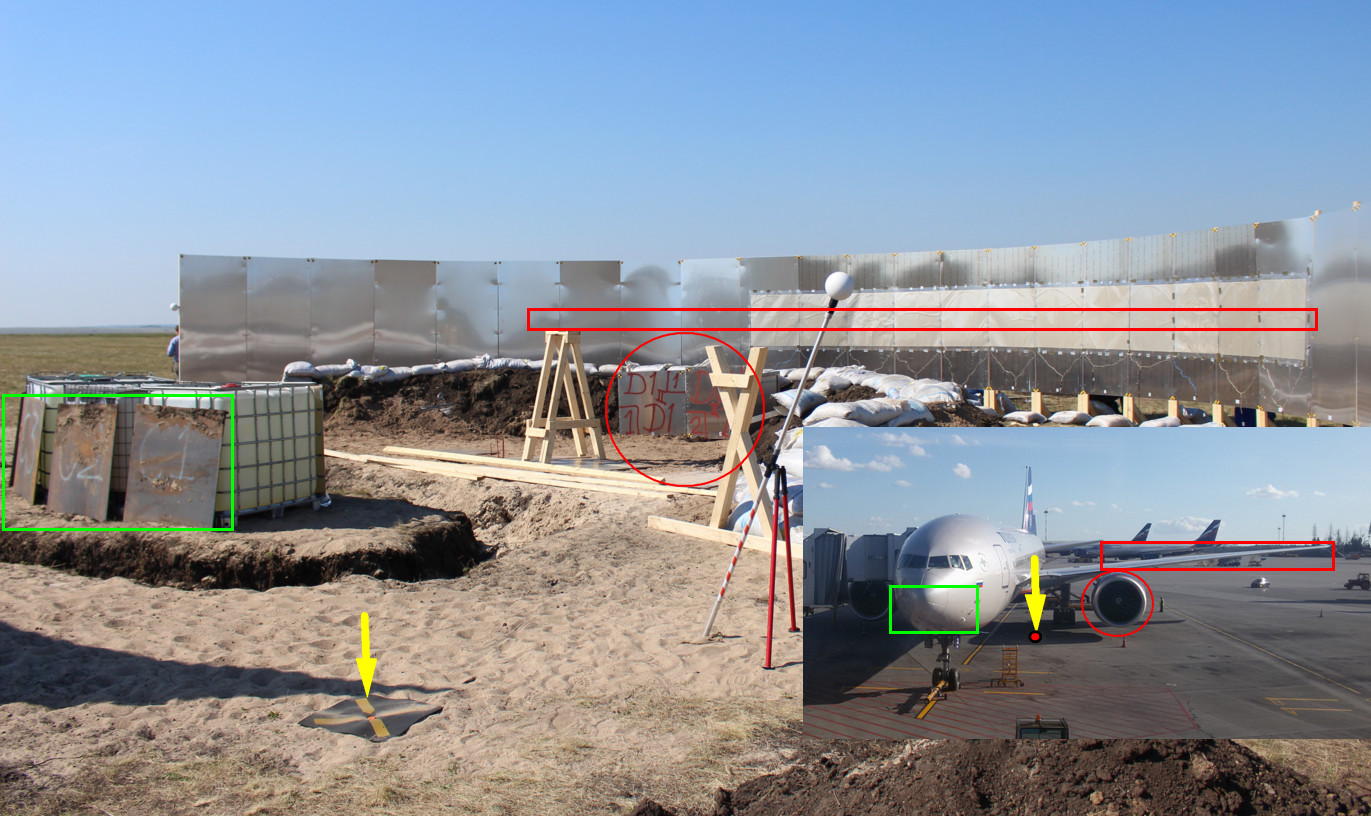