My believe documented in this post turned out to be correct. The Ukraine ambassador to the Netherlands told on tv that three radar stations were not able to detect MH17 or any missile. The first radar station was destroyed ( Artyomovsk). The second radar station had maintenance (Tsjoegoejev ) and the third did not have enough range to detect MH17

Ukraine Air Traffic control authority UkSATSE likely did not have primary radar operational over the area where MH17 was shot down at July 17.

However Dutch Safety Board in their final report stated that Primary Radar was unavailable due to scheduled maintenance.

“We are only determining the priority order as of today, but it is already obvious that the infrastructure at the Lugansk and Donetsk airports have been seriously damaged. We have a problem with air navigation in Artyomovsk because it has been taken out of action,” the acting head of UkSATSE said.

At a public hearing by the Dutch parliament Eurocontrol stated that it will verify with Ukraine which messages Ukraine sent to Eurocontor about status of radarstations in May, June and July 2014.

Mr Sultana of Eurocontrol also stated: if a radar is not functioning the state should report that to Eurocontrol because of capacity. Ukraine did not report that.

At June 16 2014 aroud 17:00 armed men destroyed a radar antenna near the village of Zaitsevo Artemovsk according various news websites. This radar station is used for long range radar detection.

The type of radar at Artemovks is identified as ТРЛК-8

This is a brochure of the Infra Primary Radar ASR-12

Around July 10 2014 the radar for Donetsk airport was destroyed 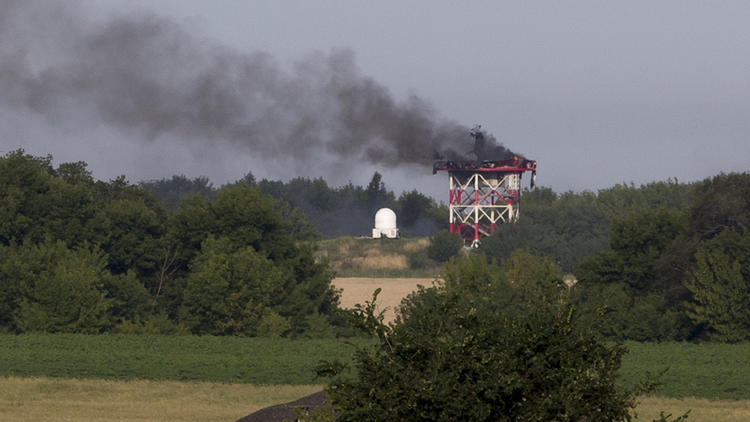 At July 17 the terminal area radars (short range radar antenna located at airport) of Simferopol,Donetsk and Luhansk airport were not available because these had been destroyed!

The modernization of Ukraine radar can be read here. An additional indication primary radar was not available for the air traffic controller responsible for MH17 was the conversation between Ukraine and Rostov ATC.

Dnipropetrovsk (DNP) requests the controller of Rostov ‘Don’t you observe anything on primary?’

So this leads to the conclusion Dnipropetrovsk controller does not have primary radar available. Dutch Safety Board reported in the final report that Ukraine primary radar of UkSATSE was unavailable because of scheduled maintenance. It did not mention anything about primary radar no being available in the days before or after July 17.

Some more information at Rian.com.ua and here