Dutchman Max van der Werff is a citizen journalist involved in several research projects. His latest research is on MH17. He is particulary interested in the two photos which are supposed to indicate the launch of a BUK missile.

Max his opinion is crystal clear. The photos are fake. And Dutch media is doing a lot of propaganda. He also published an analyse of the photos on his website.

Now in a war the first victim is truth. So everyone which is interested in truth should do its own investigation.

Max did! He went to East Ukraine and visited the area where MH17 crashed. He spoke to several people. He went the the apartment in which the photographer  of  the two smoke trail photos (named Pavel Aleynikov) lived . His goal: determine if the phots are real or faked.

His conclusion is written in this post titled : MH17 – ‘Buk launch photo’s’ are cheats

His opinion is based on his observations:

So, Max conclude the photos were fake and the photographer lied many times and changed his story.
This was hotnews for Russia’s biggest newsagency Sputniknews. In an article named No Smoking Gun: Investigation Casts Doubt on MH17 Buk Missile Trail Photos Sputniknews wrote what Max had found out. How wrong could they be.

This blogpost will show how wrong Max was. His own photos prove there are cables running close to the balcony of the photographer!

The photos showing the white smoke can perfectly be made from the balcony!

There are several  issues regarding  Max his claims and I will discuss them all in detail. Also I will publish how Max responded to questions and the final part of this blog is a conclusion.

Later Max posted this mea culpa about his mistake not to publish the cable photos.

Introduction to the photos

Lets first start with an introduction to the photos.

Below the three photos made at July 17 and which were shared using Twitter. Initially photo 2 and 3 were shared. RTL Nieuws published photo number 1 later (in December 2014). (source )

These three photos were part of a set of total 9 photos made between 16:25 and 16:30. This is an overview of filenames, date and time taken.

The nine photos are shown below. Details about focal length, shutterspeed and filename are included in the photo. These photos clearly shows what appears to be different types of weather while taken within seconds of eachother. I guess that is related to the automatic white balance of the camera.

Arnold Greidanus did some search on these phoyos. He found out some of these photos were published on Twitter, Facebook and other media. For example photo 4 was published at Facebook on July 17. The same photo was published within hours after the crash at KP.ua

Photo 6 was published in this forum also a few hours after the crash. Photo 3 was published on Twitter. Korrespondent.net took two photos.
Most of the photo’s show a moiré pattern. Probably they were photographed from a computer screen by Aleynikov’s friend Djukov (@WowihaY)

The photos including the camera were handed over by the photographer to the Joint Investigation Team MH17.

To be sure. RTL Nieuws had both missile plume photos investigated by experts. They both confirmed the photso were not faked.

I am under the impression Max van der Werff is one of the very few persons on Internet openly stating the photos are fake. Nobody so far was able to prove the photos are bogus.

The many issues with Max his statements

Issue 1: Max decided not to publish his own photos showing cables running on the southside of the building close to the balcony

The blogpost of Max does not show any photo taken at the southside of the building. The southside has the balcony from where the two missile smoke plume photos were made. Also the video published on Max his site does not show the southside. It would have been a matter of  walking a meter towards the south, turn the camera downwards and the situation would be clear. Why travel all the way from the Netherlands to East Ukraine and show only parts of the situation?

However Max shared two of his photos made on the southside privately to two other people.

These photos confirmed to be made by Max but published by others are shown below. They clearly show cables running in front of the balcony of the photographer. The balcony by the way is not the one covered by glass but the one next to it.

The photo below was released on Twitter at May 26 by Arnold Greidanus. The photo was made by Max van der Werff. Arnold did a lot of investigation on MH17. Follow him if you want to know what happened. Arnold added the text and arrows/lines.

The blue arrows clearly show a cable which is curved. The cable runs roughly north-souts to the other building. The balcony to the left of it is the balcony of the neighbor of the photographer. The other image shows the smoke plume taken from the balcony. 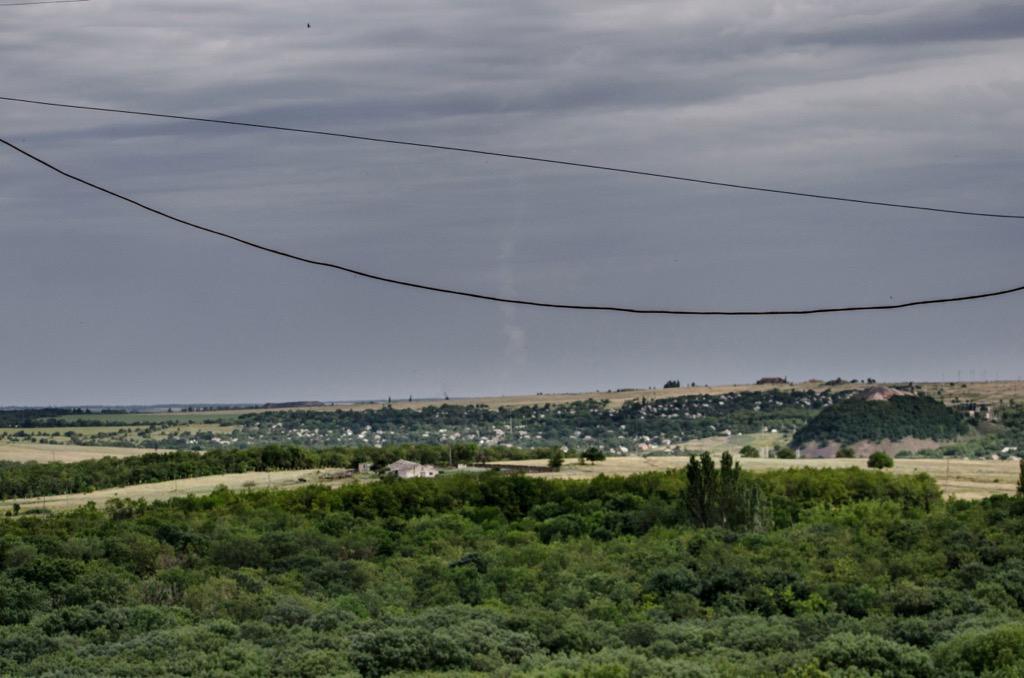 The photo below made by Max was released by a friend of Max, Joost Niemoller. The photo sent on Twitter shows the wrong balcony. The red circle is actually pointing to the apartment of the neighbor of the photographer. It does show some more cables. Left side of photo is facing West. 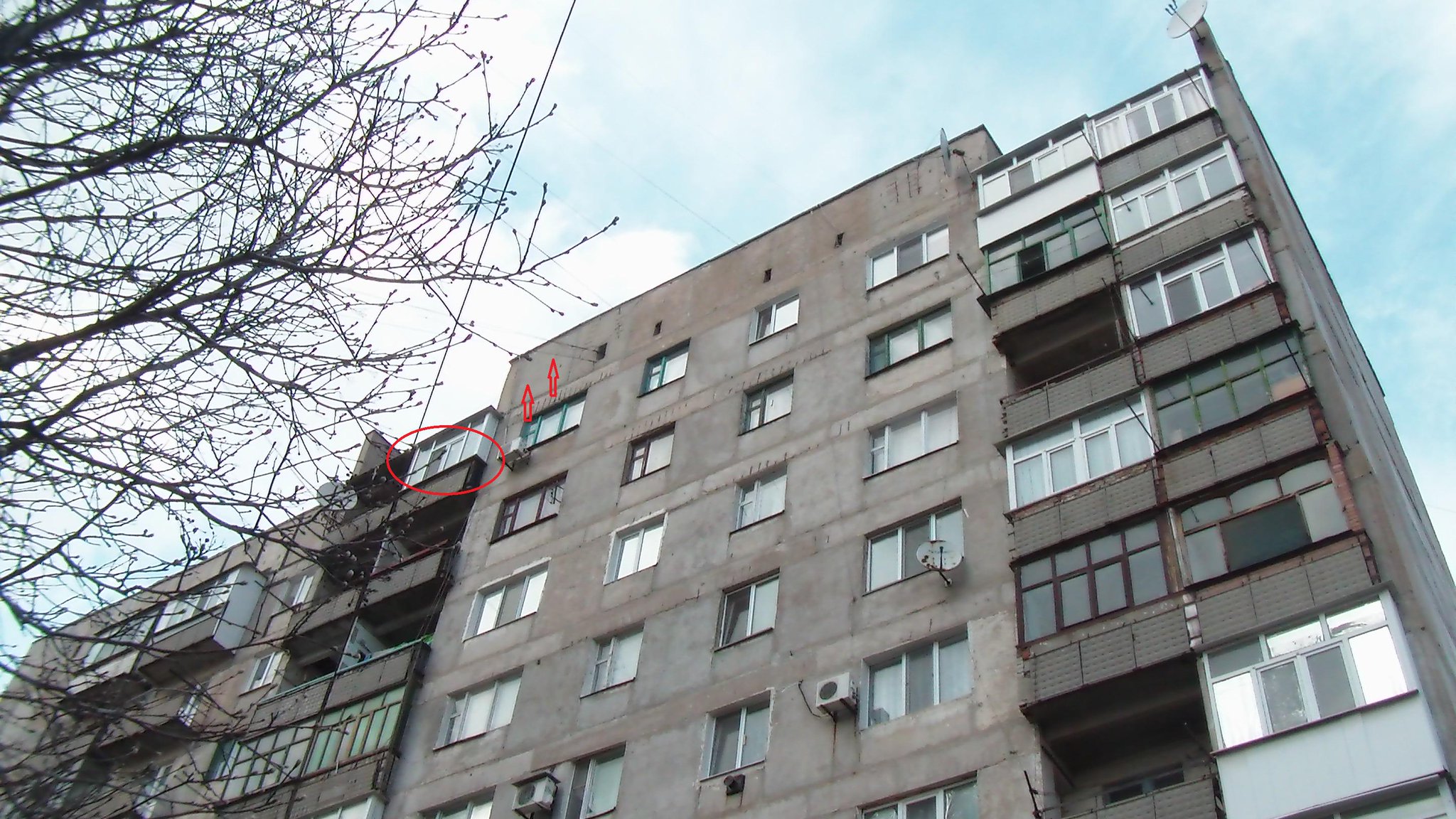 Arnold Greidanus has the original photo as well. He  added the black boxes and lines. The yellow dot represents the correct location of the photographer.

And this photo shows the cables even better (source)

Max claims the photos could only have been taken from the most easterly part of the roof (the blue square in the photo below). If more in the middle of the roof there might be cables in the photo (green circle), but also the concrete roof would be visible. The impression below is made by Max. The origin of both red lines is the balcony of the photographer. Which Max did not enter unfortunately.

The  location where the apartment  in Google Maps 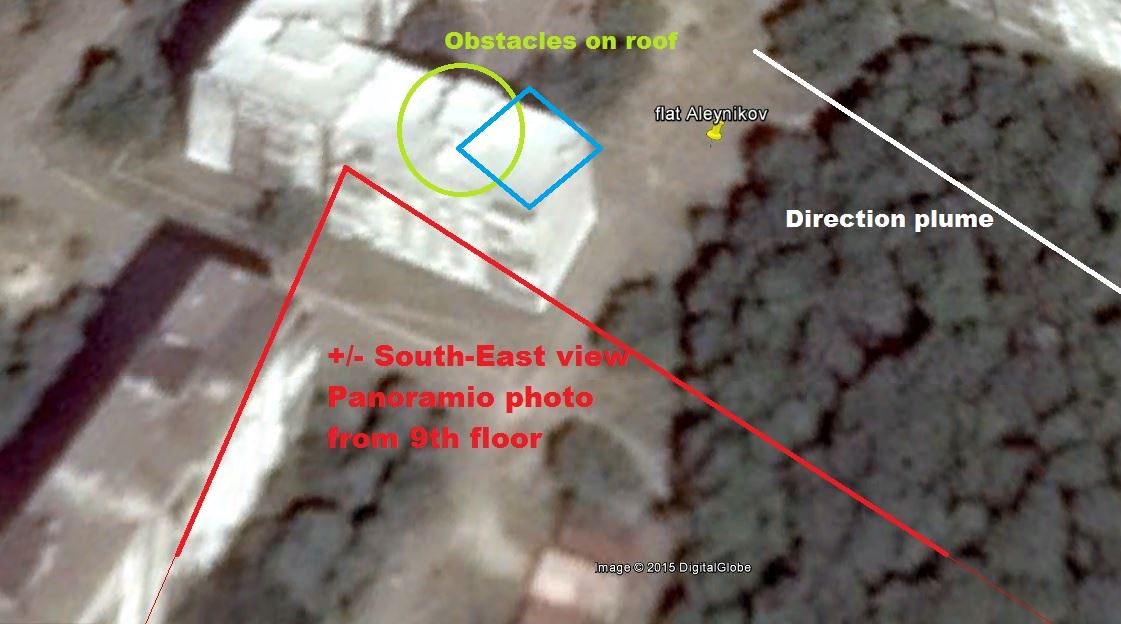 To be able to show the truth a complete picture must be given. While Max filmed the roof of the apartment building, he did not publish photos of the south side of the building n his blog. He could have asked someone living on the 9th floor (the neighbors of the photographer) if he could enter their balcony.

The first photo shows the situation from the balcony of the photographer at May 8 2011 . The view is roughly towards the South.
The second photo shows the plume photo taken at July 17 2015. Both photos show cables.

To be sure someone needs to go to the apartment and take photos of the same balcony. Or stand on the rooftop, take a long stick and try to simulate a position from the balcony. The balcony is at the 9th floor, being the highest of the building. 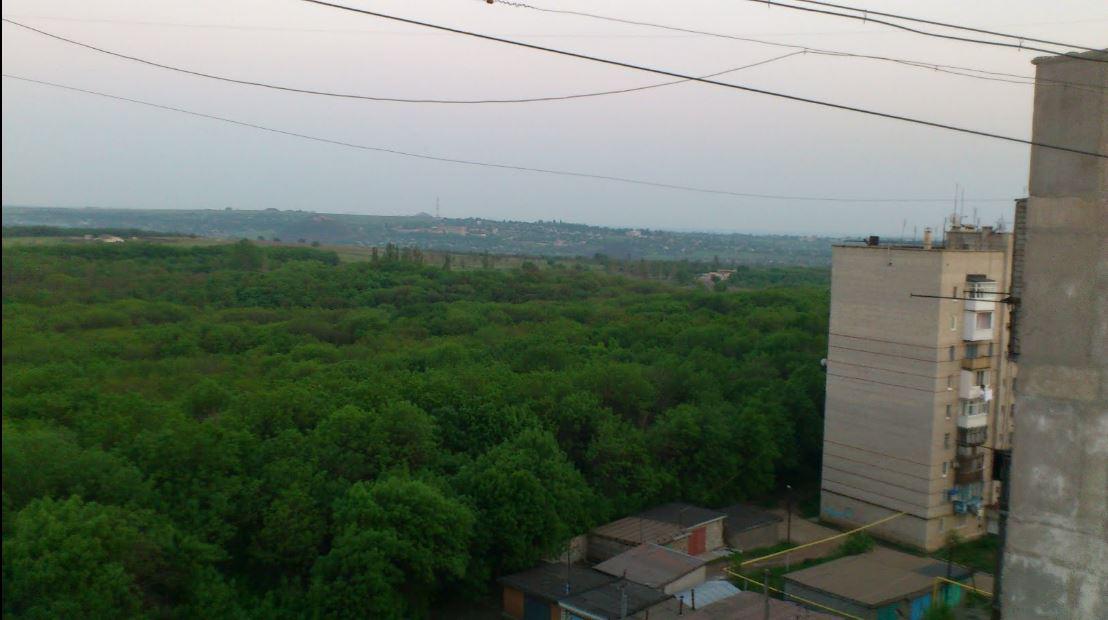 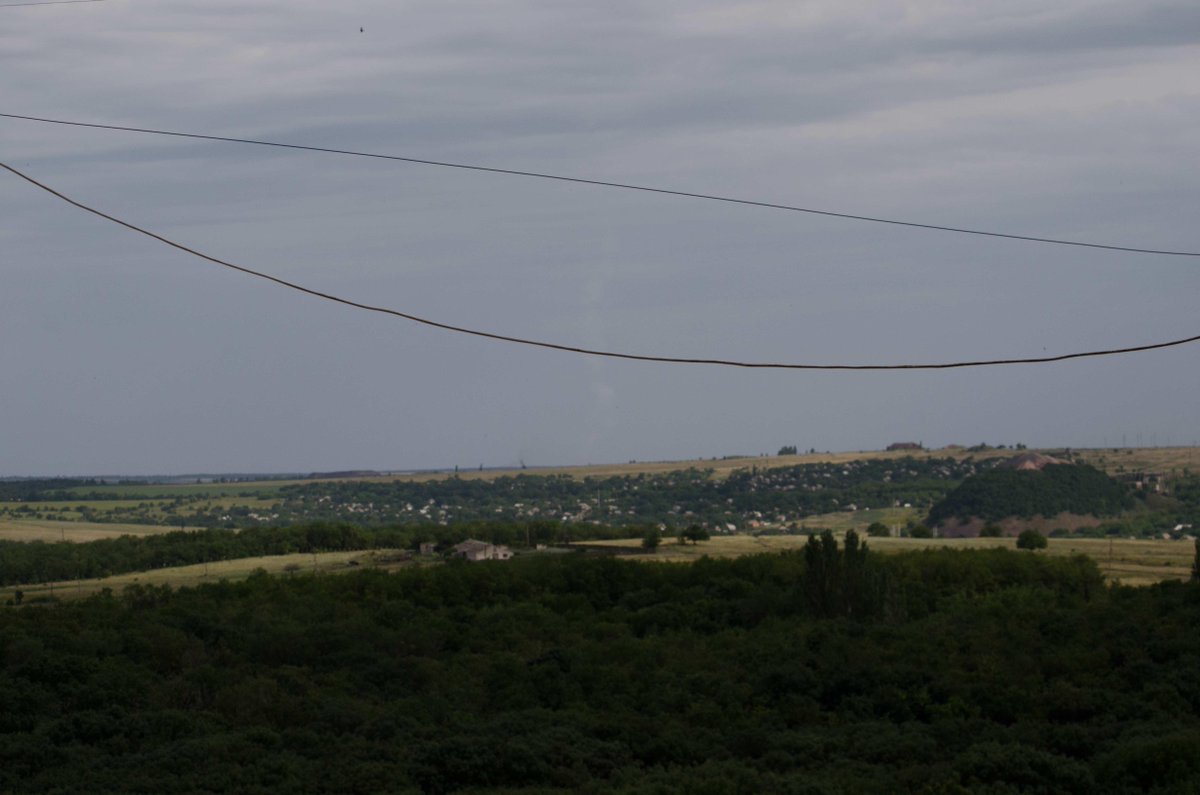 Max assumes the balcony which has windows was of the photographers apartment. Probably based on the coordinates of photos made by the photographer. However the actual balcony is the one next to it. The one with no windows. As indicated by the yellow dot on the above photo.

Max claims the photographer told three times the same lie. The lie is according to Max that all photos were taken from roof.

So the photographer did not lie three times. He was misquoted and that was copied by Daily Mail.

Issue 4: jumping to conclusion smoke trail photos were made on roof

Max himself writes on his own blog that the photographer (called the witness) heard explosions, made photos inside his apartment of the missile plume and then went to the other side of the apartment. 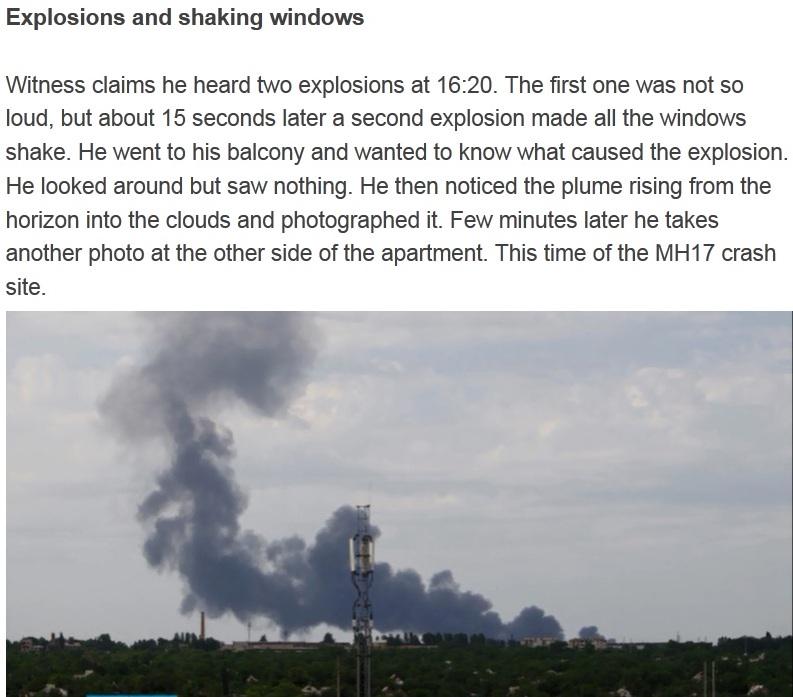 I can only find one reference in the media which states the photographer made all three photos (two of the BUK smoke trail and one of crash)  on the roof. The source is TSN  which published an interview with the photographer at March 17. At March 22 Daily Mail copied the content and published it here.

However on the day of the crash, July 17, the photographer was approached by a journalist of Business Insider. He told :

Although he did not see the plane crash, he said he ran to his window after hearing the sound of an explosion after the plane fell to the ground. He could not see the situation from his balcony, so he climbed to the roof of his house and “saw the smoke on the horizon.”

This does not mean the photographer took all of the photos on the roof. He most likely was not aware at that time he took a photo of a missile trail.With ‘smoke on the horizon’ he meant the smoke of the MH17 crashsite.

Around mid December the photographer had an interview with Dutch journalist Olaf Koens working for RTL Nieuws. He told Koens he looked from his covered balcony and within 30 seconds after the explosion he made the two photos of the smoke trail. 30 seconds is not enough time to go the to roof of the building.

The TV inteview can be seen here.

So the initial statement of the photographer was that he took the BUK missile trail photos from his balcony.

Issue 6: Max knew photos could have been taken from balcony yet did not investigate it properly

Max could have known that the missile photos could have been taken from the balcony. He asked this at the Bellingcat forum in February. This was well before his visit to the Ukraine. Still he failed to publish photos showing the layout of cables on the southside of the building. Why?

Issue 7: Max claims the photographer lied because there was a fourth picture. In fact more than three photos were made public!

Max states the photographer lied because the told about number 1,2 and 3 photo. “But there are at least four photos” . Max, I have news for you! The photographer made 9 photos!

Why would it be a lie if the photographer explains that the famous 3 photos are  taken at his balcony and at the roof? He did not tell he made 9 photos because that was not relevant.

Max is  what we in the Netherlands call “spijkers op laag water zoeken”. Or Nitpicking

Issue 8 : Max does not anwer questions

I asked Max using Twitter the questions below. Max did not answer these questions. Basically Max keeps on saying he wants the EXIF data of the photos and the real story of the photographer.

1. Did you contact the photographer before your visit to Torez? Using what? (Twitter/email etc)
2. Are you sure the balcony covered by glass is part of the apartment of photographer?
3. Were you aware before your visit to Torez that the photographer could have made the two missile plume photos
from the balcony on the southside?
4. Did you take the photos showing the southside of the building which were released by Joost and Arnold?
5. If so, why didn’t you include those photos in your blogpost?
6. Why didn’t you walk with your camera a few meters to the southside of the roof to show situation?
7. What kind of information are you looking for in the EXIF?
8. You talk about a fourth photo! Do you mean this https://www.facebook.com/max.vanderwerff.9/posts/895275667197930?pnref=story?

Max’ claim the photos are fake is debunked by his own photos. These clearly shows the cables also seen in the missile plume photo. He again proves his reports have a hidden agenda and are far from being reliable.

Update May 27:I changed the orginal blogpost because of new information. Two photos were released. Also added Max (lack of) response to my questions.