Lots of questions on how Bellingcat is funded especially from Russian Federation government and Russia Today journalists.

While I did not do research on the funding and financial situation of Bellingcat, some details are public. I like to encourage everyone to do research.

The founder of Bellingcat is Eliot Higgins. In 2017 Bellingcat has 6 full time employees.  Including Higgins these are  Christiaan, Narine, Aric, Hadi + one more. BC should also soon have an admin person and fundraising director joining by year end.

All the other authors and researchers work as volunteer.

In 2014 Bellingcat started a crowdfunding. They raised  £50,891 via Kickstarter.

Higgins and Toler received end of 2016 funding from Google Digital News Initiative.  The amount of money is not known publicly. The grant ends at the end of 2016.

At February 2017 Elliot Higgins on Tweeted told by whom Bellingcat is funded.

Bellingcat has received money from the following: OSF, Meedan, NED, Google, Adessium, and via crowdfunding.

In 2016 Bellingcat received an unknown amount of money from Dutch fund  Adessium (the owner is the van Vliet family, which donates money to investigative journalism.

In May 2016 dutch Newspaper NRC reported Bellingcat cooperated with OSF for creating a website in Russia.

NED is National Endowment for Democracy a private, nonprofit foundation dedicated to the growth and strengthening of democratic institutions around the world. Each year, NED makes more than 1,200 grants to support the projects of non-governmental groups abroad who are working for democratic goals in more than 90 countries.

According Higgins: “The NED money is for training Russian language journalists in verification and open source investigation”

Whatever you might imagine about NED and AC I’ve not received funding from NED. Stop reading conspiracy websites.

@Documark Whatever you might imagine about NED and AC I've not received funding from NED. Stop reading conspiracy websites.

around June 2017 a second Kickstarter crowdfunding was started. 1,595 backers pledged £68,557 to help bring this project to life.

In 2018, 2019 about half of the income for Bellingcat is obtained by presenting workshops all around the world.

In 2019 Bellingcat received Euro 500,000.- from the Dutch Postcodeloterij (lotery). The money will be used for a new office in The Hague. 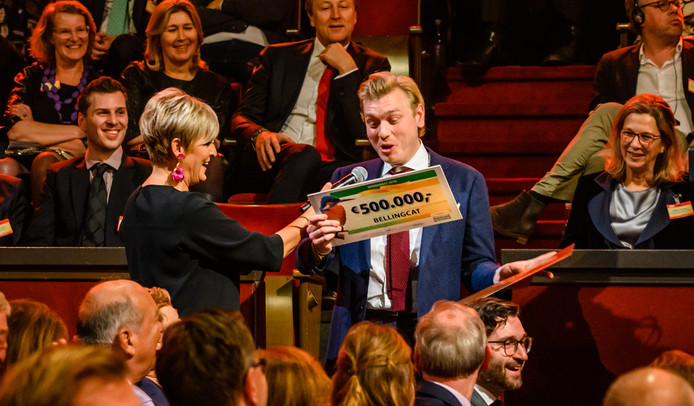 Majority of our $ comes from workshops we run. Also get about $3k/month from our Patreon. We have a variety of other smaller funds (none of whom give more than 10-15% of our total budget), the largest of which I think is OSF.

7 Comments on So how is Bellingcat funded?