The pressconference can be seen here

On a personal note I believe this is another attempt to confuse and mislead. One of the reasons is that Rosaviatsia seemed not to have read the DSB final report. One of the Russian journalists asked how many attachments the DSB report had. The response of Storchevoy was: “I cannot answer how may attachments the report has, we haven’t reviewed it in detail. So I will not answer” and “We didn’t have to read it (the final report) in detail, we only got it yesterday”

“We do not refute or deny any versions. We believe that there is a need to conduct further studies to determine what the aircraft was struck by,” Storchevoy said according to Sputnik news

“Russia will use the standard presented in annex 5.13 to the Convention on International Civil Aviation to initiate the resumption of the disaster investigation,” Oleg Storchevoy told reporters

Some of the statements made by Rosaviatsia were : 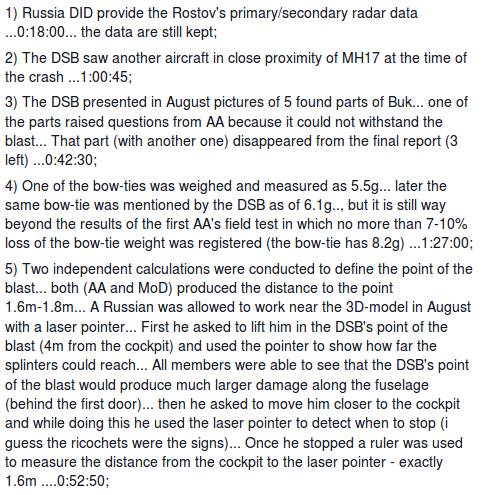