There are many eyewitness who saw a missile flying at July 17, 2014. This post will provide an overview.

In total about 12 people stated in various media they saw a missile which came from a direction southeast of Snizhne.

Interesting enough the Russian media (especially Russia Today) was not able to find any eyewitness who saw a missile flying.

Basically there are 5 places  where people saw a missile:

In a tv program of Dutch Nieuwsuur  a commander of Vostok Batallion stated his men saw a missile launch from the ground. Commander Som didn’t see the missile but his men told him they saw it went straight up turning right. It did not hit MH17 though, he said.

The location of the men was not stated, but it must be somewhere in the area south of Snizhne, near Saur Mogila

Dennekamp talked to 6-8 people who saw a missile flying. None of them pointed to Red October as launch location. They all saw a missile which came from a southeasterly direction. A 40-year old lady stated she saw a missile coming from Stepanovka and flew westerly of Pervomasjki on an north-westerly heading.

His report can be read here.

The end of this blogpost shows the possible launch location according DSB final report.

At July 16 2016 Dutch newspaper NRC published an article about MH17. Reporter Steven Derix went to Pervomasjki and spoke to a person named Anton (12) who heard the BUK launch. He couldn’t see the BUK launcher. Heard the roar of the launch (no explosion but a hissing sound psssssjt )  and saw the rocket coming over the trees.

Anton walked at the small lake westerly of Pervomasjki. He saw the missile flying in a north-westerly direction. He stated he saw the aircraft being hit and how one of the wings separated. He could see the missile well leaving a smoke trail. He is not sure about the colour, he believes it was white. He is not willing to talk more about the event.

The NRC reporter did not talk to other witness in Pervomasjki. Below an image explaining the situation.

Anatoli stated he was swiming with his friend in the river Miuc in Grabovo.  He heard a noise. He saw a cone. The missile came from the southeast direction Snizhne. Interpretermag.com has the story as well as other eyewitness stories.

A man interviewed by Volkskrant saw the missile plume and pointed towards the Southeast for the direction the missile was coming from. Volkskrant reported here.

Zello is a sort of walkie-talkie app used on mobile phones. A Zello conversation was recorded just after the crash has happened. The translation was published at Ukraine@war, a Pro-Kiev website.

An unidentified woman (called woman B) states she was in the garden at Oktyabr (Октябрь) and watched a missile flying coming from the direction of Saurivka. The missile was flying above Oktyabr.

Bellingcat in this blogpost stated the location woman B was must be a street called Red October.
The webmaster of Ukraine@war stated Oktyabr is the southern district of Snizhne. So a part of the town of Snizhne. The reason is because of Oktyabr’skaya street.

It seems unlikely the woman lived in Snizhne itself. She stated

above Oktyabr’ flying there, you know, to… towards the town, in that direction.

Would you say “above Oktyabr’ when living in a street, and toward the town if you live in the town itself? 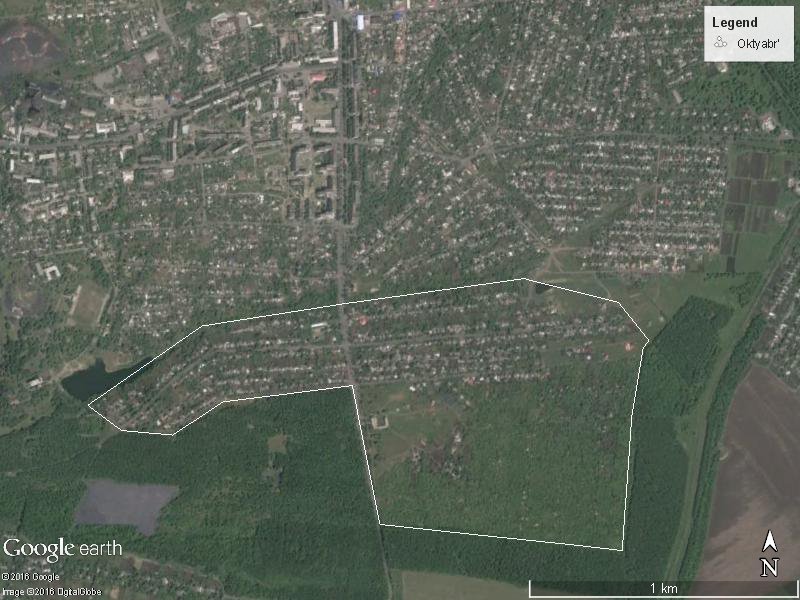 It makes much more sense this woman B was located in the small village of Chervonyi Zhovten. The village was later visited by Reuters, NOS and BBC.

[2:25] woman B
Guys! I’ve just listened to the story… (sigh) Right then, I was at the garden, at Oktyabr’ (no Wikimapia link available) sound, out of nowhere, there was droning sound. It was silent right before that, and then suddenly there was loud droning sound… I [looked] at the sky, err, something was flying… well, I, I can’t tell for sure, well, from that direction, it was flying as if from Saurivka [Wikimapia-link]. I thought it was a missile, ran inside the house, shouted to my mom, well, after we went down to the basement, only then did we hear some bangs, explosions.
But it was flying and smoking—with a white smoke—and strong buzzing loudly above Oktyabr’ flying there, you know, to… towards the town, in that direction.

Reuters went here and talked to Pyotr Fedotov, a 58-year-old resident. To Dutch newsstation NOS the same man later denies he ever said that.

Reuters talked to Valentina Kovolenko. She saw the missile. Her daughter Anastasia Kovalenko, 14, said she saw a rocket flying over the village, and then a plane in the distance blowing up.

Olga Krasilnikova, 30, also said she saw a rocket, some time between 4 and 5 p.m. “I saw it was flying, flew right over me

None of the villagers saw the missile actually being launched.

BBC documentary Conspiracy Files: Who shot down MH17?   like Reuters had an interview with Valentina Kovolenko (45 years old). She lived in Red October and told she saw a missile. She saw a black plume.

Which is remarkable as Woman B in the Zello conversation spotted a white smoke trail.

This is the voice of an eyewitness.

The DSB report calculated an area of 320 sq km from where the missile could have been launched. The image below was made by Bellingcat and explained here..

The yellow area is calculated by Dutch NLR and shows 320 sq km.

The Almaz-Antey simulated flight paths for the 9M38 and 9M38M1 missiles are marked by the red and blue outlines (respectively). The 9M38M1 area was 63 square kilometers

The small area with the red and black pins was calculated by the Ukraine research institute.