Update: At May 13 Stratfor published a Digital Globe satellite photo showing what looks like a BUK TELAR transported by a white truck.  See the details in this blogpost.

At May 12 2016 a new video was discovered on Youtube showing the BUK TELAR on a lowloader pulled by the famous Volvo truck on a road near Donetsk travelling eastwards. The video was made using a dashcam in a moving vehicle most likely at July 17 2014.

Bellingcat reports that the fuel prices shown in the video are the same as those published on an archived webpage of the fuelstation company dated July 18, 2014. The price listed on the sign first had the displayed value at July 11 as seen in the webarchive. At July 21 afternoon the prices were changed.

The video was made on the same road as  this video made at July 15 2014. This video shows various military vehicles like tanks heading towards Donetsk.

Why this video after almost two years?

It is remarkable this video was uploaded almost two years after the shot down. What could be the reason?

A theory is that someone who initially had sympathies for the separatists, now felt the situation in Eastern Ukraine was worse than in 2014 when Kiev had control. So he or she decided to upload the video.

Another theory is that someone sent the video in 2014 to the JIT. Someone working for JIT leaked the video and uploaded it to Youtube. Maybe to prepare the public for the release of information in July 2016 by JIT. Remember censor.net published some leaked photos earlier.

Michael Kobs calculated the speed of the truck as 37 km/h to 40,7 km/h 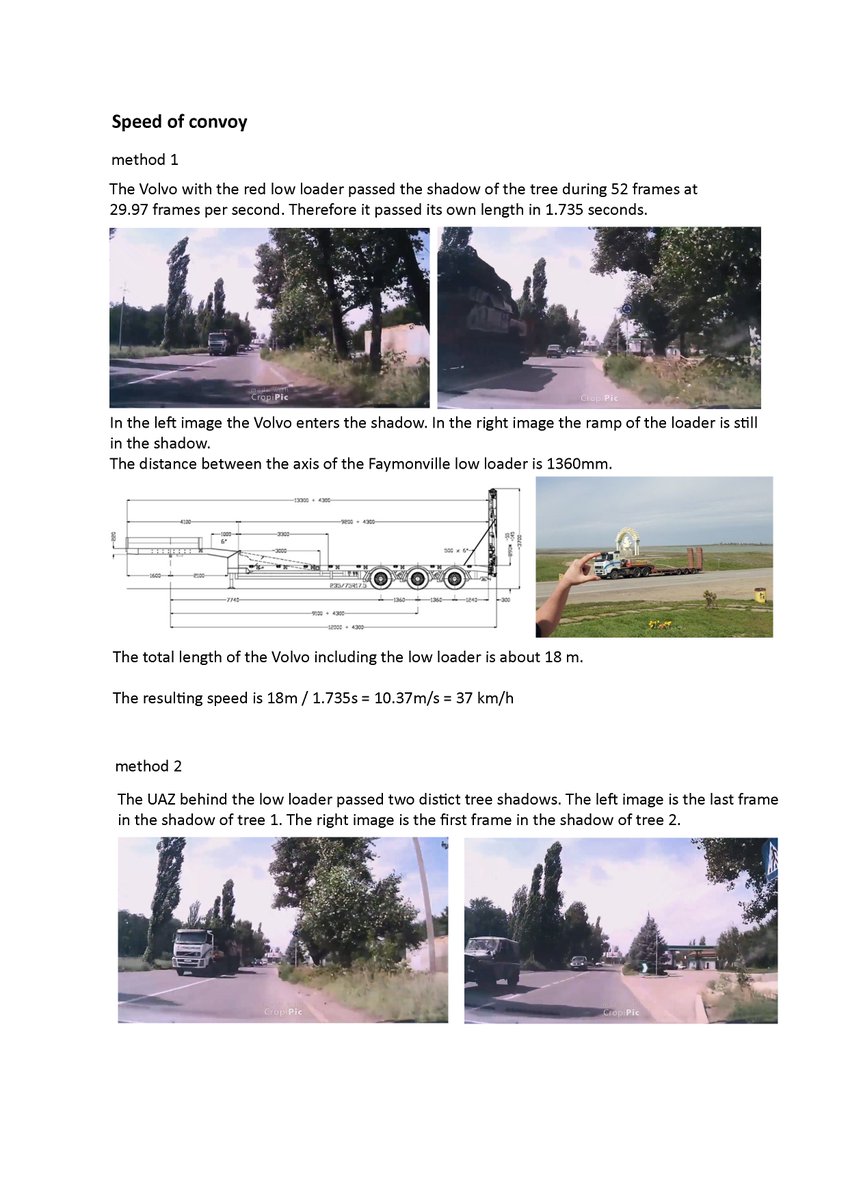 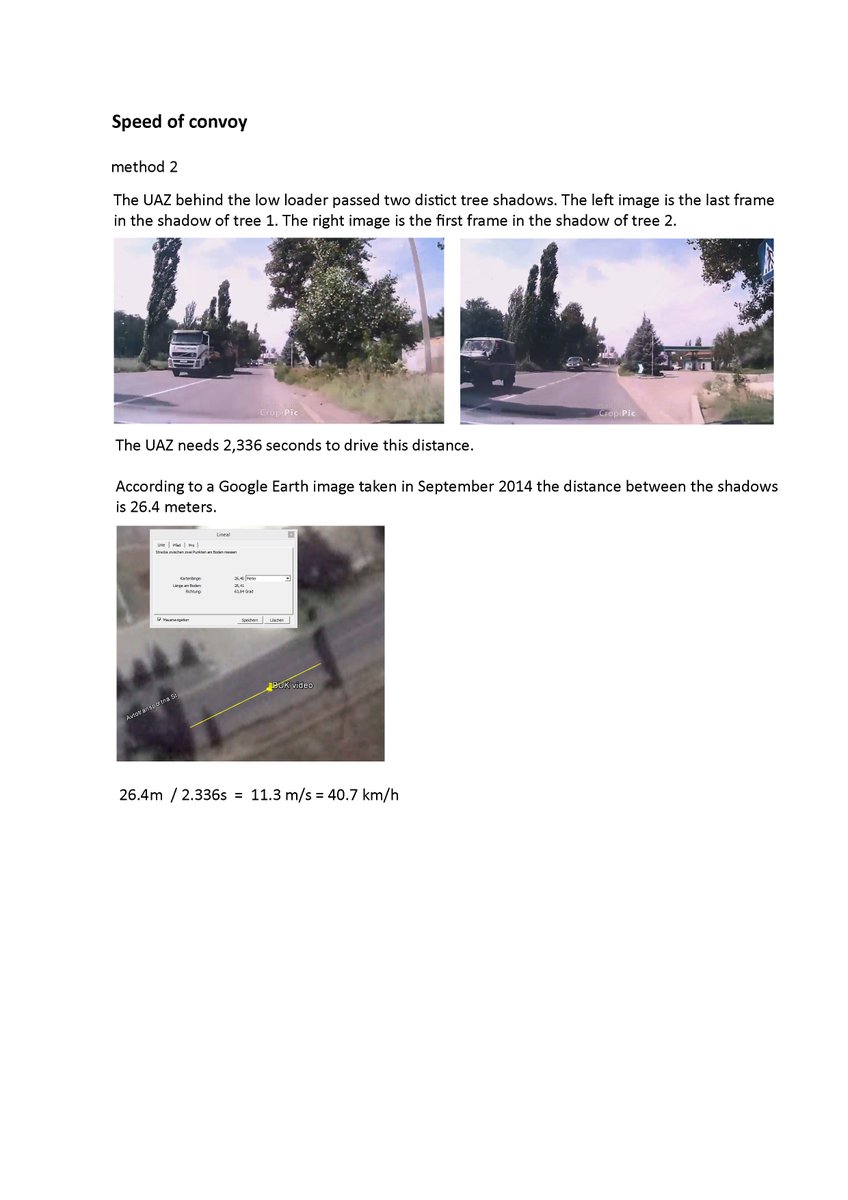 Remarkable no tank tracks marks on road to be seen

At the July 15 video the track marks made by a tank can clearly been seen at around 44 seconds into the video in front of the petrol station. The newly discovered video does not show these tracks. The video however is clear enough to show the fuelprices on the sign right of the road.

These two videos (here and here)  (thanks Ole for mentioning ) show the damage done by tanks of the same type. The road is clearly marked with tracks.

This could indicate the video was made before July 15.

Another observation is the quality of the video. It has been modified using the CropiPic software as seen by the watermark in the video.

The BUK appears to have 4 missiles loaded.

The video must have been made at at a time after the Paris Match photos in Donetsk were made and before the Zuhres video.

The timing is interesting. Based on shadows the video was made around 11:10 local time. The distance to the location of the Zuhres video is 27,5 km. Google estimates a driving time of about 30 minutes for a regular car. The Zuhres video was made at 11:40 according the person who was first to publish the video. So the convoy must have driven at a speed of over 50 km/h to reach Zuhres at 11:40. Which is quite fast as the Zuhres video shows a speed of about 30 km/h. However the road at Zuhres heading to Torez is more or less up hill.

Made by same dashcam/ car?

Could this video have been made from the same dashcam as the screenshots published by Paris Match? It is not sure if the PM photos were screenshots of a dashcam or made handheld by someone in the car.

It seems the windscreen wipers do not match in shape.  This image clearly shows the righthand wiper of the car from where the PM photos/screenshots were made.

The first image below shows the wiper of the May 12 discovered video. The connection between the moving arm and the wiper seems different than that of the car of the PM photos.

Weather at time of video

The video seems to resemble the weather as observed by weather satellites. The yellow circle shows the clouds which are shown in the screenshot taken from the dashcam. They seem to match.

This picture was taken by the DigitalGlobe satellite at 11:08 local Ukraine time. The red dot on the right is the location where the May 12 video was made. It shows clear weather over the area where the video was made.

The video shows some clouds and blue area’s. It is hard to determine if the weather on the video matches that of the satellite picture. I believe it could be.

The first vehicle in the convoy has the alarm lights flashing. It is a Peugeot 3008 model 2014. The type was identified on a German webforum. The second car in the convoy has the alarm lights on as well. It is a Toyota RAV4.

This is an animation of a Toyota RAV4 escorting another separatists convoy.

The third car in the convoy is the Volvo known from the Paris Match photos and various other videos. It carries a BUK TELAR on a lowloader. The BUK has some netting over it.

The fifth car is a Volkswagen Transporter type van with a flashlight on its roof positioned above the driverseat. The Transporter seems to be of a type used by Ukraine banks to transport money.

The Volkswagen could be the same vehicle as described here but then named a dark blue Hyundai van with tinted windows. The eyewitness reported a convoy seeing heading towards Donetsk in the morning of July 17. The photo below shows the VW Transporter part of the July 15 convoy. 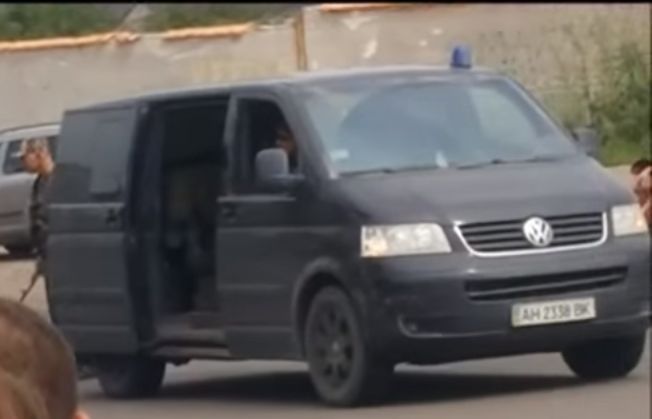 I am not sure if the sixth car is part of the convoy and what type it is.

The May 12 discovered video

The video was first reported on Twitter by someone using the Twitterhandle @AmishJihadi. He notified Aric Toler and Eliot Higgins of Bellingcat.

It is remarkable this video was published almost two years after the shot down of MH17.

The route of the convoy was heading north/ northeastwards towards the H21 major road connecting Donetsk to Torez.

The image below was published by Putin@war on Twitter 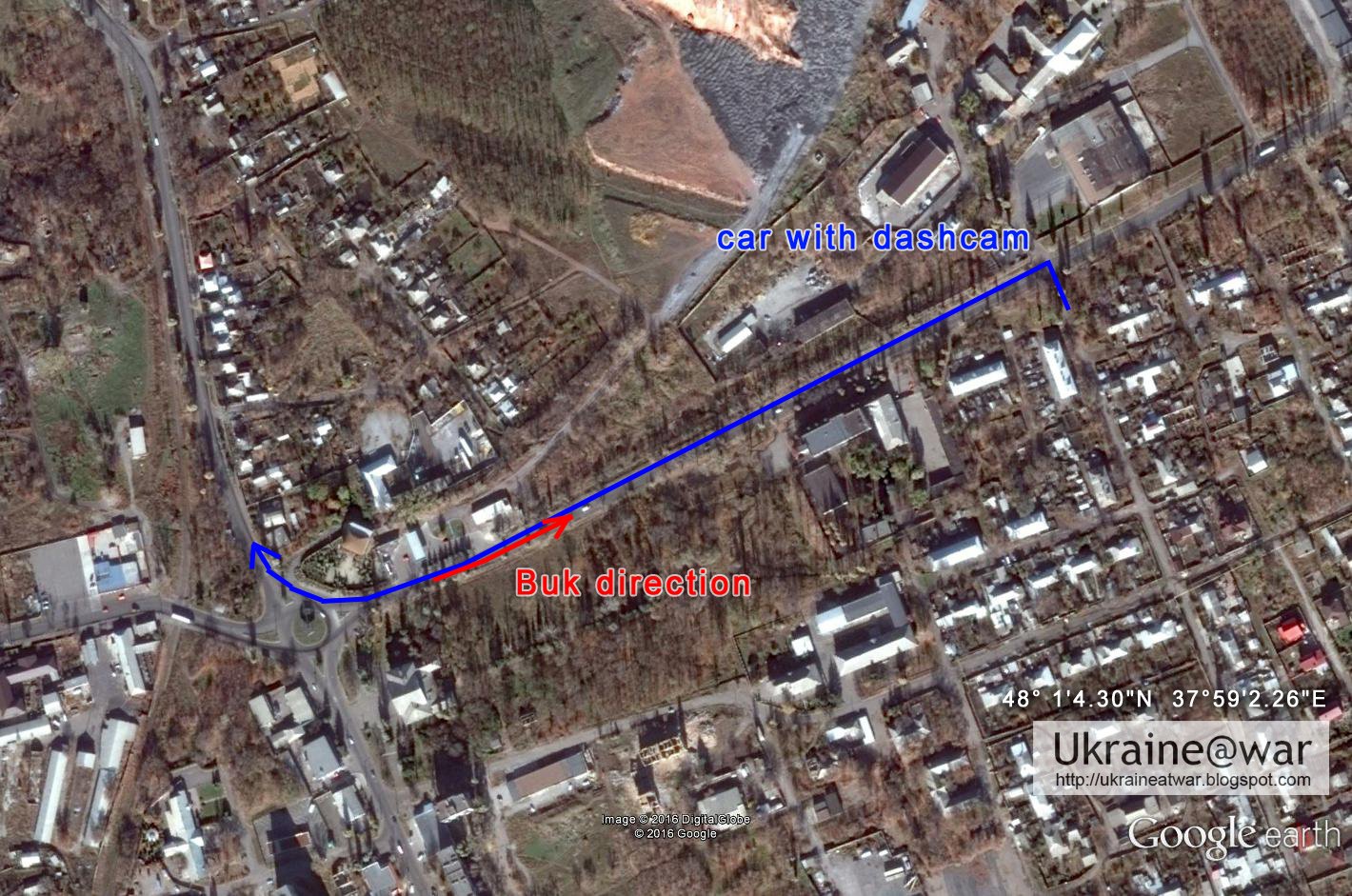 The BUK convoy is probably not seen on the DigitalGlobe satellite photo which was purchased by Bellingcat. Because of license restrictions Bellingcat can not publish the high resolution photo it purchased. Below is a photo showing the area covered by the DigitalGlobe photo.

The photo above shows the complete area which was photographed by the Digital Globe satellite at July 17. Bellingcat purchased only a small portion of the photo. Aric Toler showed the photo purchased on Twitter. It is shown below. The blue line is the route of the BUK transport as we know it now based on the newly discovered video of May 12.