At February 23 2015 photos were made of wreckage of MH17 still being not recovered by the Dutch Safety Board. The photos were made a few kilometers North-Northwest of the village Petropavlovka.

In this area there was heavy fighting between the Ukraine and separatists army until around mid February 2015. After Debaltseve was captured by the separatists the area near Petropavlovka was safe for citizen to explore. 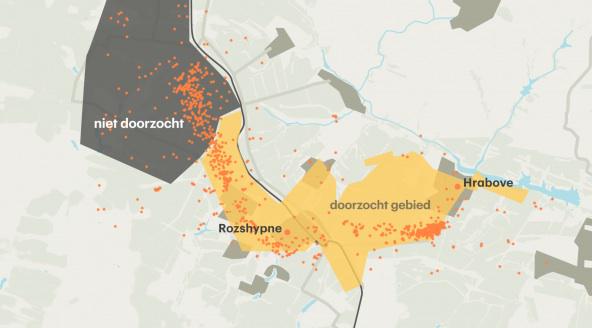 The set of photos can be seen here. The photos were made by a user who is using the nickname Сепаратист on a Russian forum . A link to a downloadfile of the photos is here.

Recently Dutch reporter for RTL Television Jeroen Akkermans visited the crashsite for the fourth time. He visited the area near Petropavlovka as well and made many pictures of the debris still around. See his album here and here.

A very interesting photo in the set of user Сепаратист  is shown below. It shows a part of the engine nacelle (the outer skin of the engine) of the Malaysia Airlines Boeing 777. Most likely it is the nacelle of the left engine. This because the missile hit the lefthand side of the aircraft and came from the south-east. As it exploded left and above the cockpit, the fragments could unlikely have  reached the righthand side of the right engine. As you can see the position of this piece of nacelle is slightly right of the engine top.

The photo clearly shows small, irregular shaped entry holes which appear to have originated from the front of the engine. These are clearly not bullet holes. Nor a result of decompression as an engine is not compressed like the cabine. The fragments are unlikely to be part of an air to air missile as these use rods (a strip of very heavy metal like wolfram shaped like a pencil)

The photo below shows the Rolls Royce engine used by the Boeing 777 and the location of the part found which was found near Petropavlovka.

This particular part was found in the area indicated by the red circle.

The other debris which were found are part of the righthand side fuselage as seen on this photo edited by Arnold Greidanus.