We all know the power of media. Newspapers and the 8 o’clock news on tv are important sources for information which you and I use to form our opinion on actual matters. We all know Putin has control over a majority of the newspapers in Russia. Only a very small number of Russian newspapers is unbiased towards the Kremlin.

The Kremin is using so called trolls to spread their propaganda. Not only on the war in Ukraine but also on subjects like Israel’s attack on Gaza and the Scottish independence referendum.

Rule number one for any leader which dislikes democracy is to control the press. See Turkey, see Iran, see China, see North Korea and see Russia. Turkey has the highest number of jailed journalists in the world!

A Russian Internet group called “Anonymous International” has leaked instructions written by the Kremlin for Russian state tv on how to report. See the full story here.

Internet is becoming a serious source for information on actual matters. Twitter spreads news very fast like the snowball effect. Everyone can become a newsreporter by writing a blog.

It is for a very good reason that some leaders want to control Internet access.  China has a firewall. Turkey, Saudi Arabia and more countries filter access to foreign websites.

In this blogpost we are not discussing access to information but the reverse, spreading as much ‘information’ as possible.

Mark Twain is believed to have once said: “It’s easier to fool people than to convince them they have been fooled”

Russia is increasingly using internet as a way to express their story or propaganda if you like. This is done using various social media sources like Twitter, Facebook and Vkontakte (Russian version of Facebook) which are very frequently used for spreading pro Kremlin views. Last but not least blogs and comments on articles in western newspapers are used for spreading opinions.

An enormous amount of real people and automated accounts are used for this so called trolling.

This relatively young way of spreading propaganda is not a very well known practise. Just a few newspapers and webblogs reported about this new phenomenon. Many people are actively spreading dis-information about various subjects. Mostly on the East Ukraine fightings, on Gaza, on Crimea and on domestic Russian matters.

So what sort of accounts can be distinguished on Twitter? I believe various levels of accounts are used:

The disposable level: these are most likely automated Twitter accounts. If theses accounts are deleted by Twitter for breaking the rules it does not matter much. The content they spread is like hunting using hail of bullets. Shoot as much as you can in the blind, you might hit something. The avatar (picture) is very often not a personal picture but a drawing, an animal etc. These accounts have a very low number of followers. These account do not retweet many Tweets and often have not sent more than 100 Tweets during the lifetime of the account.  Also they do not reply to Tweets addressed to them. An example of such Twitter accounts can be seen when searching for the text ‘Do you still remember about Boeing shot down‘. The result will show this text has been Tweeted by over 50 different Twitter accounts around September 20. The use different hashtags like #Boeing , #Donbass, #MH17 and #EU.

Hashtags are used to get attention but also to hide more reliable Tweets. It is just like in normal oral communications: people tend to listen to the person who shouts the loudest.

The professional level: these are Twitter accounts managed by real people. They often have a human face as avatar and a realistic name (no nickname). However they are not likely to use their real name. Typically these accounts sent out Tweets on various subjects. War in East Ukraine and Gaza, Crimea, and even supposed fraud during the ballot in Scotland. These accouns have a high number of Tweets , often in the 10.000s. You won’t see Tweets sent out by these trolls with texts like ‘just had nice dinner at restaurant’.  Most Tweets have some sort of political message. The accounts uses various language. I have seen accounts Tweeting in perfect Dutch. On Twitter, trolls are  expected to manage 10 accounts and tweet 50 times a day. @Spainbuca is an example of such an account. This account was supposed to be owned by a man working for Kiev Air Traffic Control at the time of the crash of MH17. He tweeted the aircraft was chased by Ukraine fighter jets. The account was deleted the next day. Before July 17 he Tweeted about various stuff. Mostly on Kiev and Gaza. See an example here.

This is another example of such a troll account. No real name, just Brian. He does respond to questions asked so not a bot.

The image below shows Tweets by the disposable level on MH17. All Tweets exactly the same, just hashtag is different.

Here anoter example of these kind of Tweets.

And the text  “All hates Putin&Russia.But why all Boeing crash official details are hidden? Did ukrainian shoot it? ” has been sent by over 50 Twitter accounts as well.

One of the main objectives of “work” – join the debate on news sites, provoking other users nav “bind their views and trolyty. Among the main topics imposed – the deterioration of living standards in Ukraine, the third Maidan pressure on Russian-speaking residents, punitive operations in the east – all must be submitted on a background of the fact that Russia and the Crimea allegedly live well.Pay for such work hourly, in rubles: 5 to 15 rubles per post ($ 0,08- $ 0.25). The authors placed ads say that the work will be ongoing for at least 3 months.. 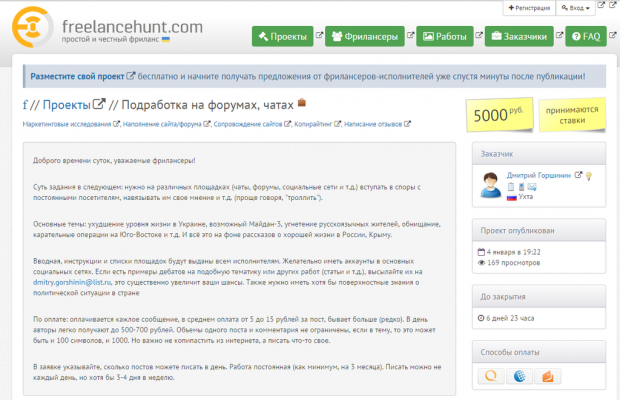 Is is without a doubt the Kremlin is using a massive number of people to spread their propaganda to the rest of the world using all sort of social media. Russia is not unique, other countries likely do the same altough on a much lower scale.

Russia Today reported in 2013 about Israel which was set to recruit students to work undercover in “covert units” at universities. The students will post messages on Facebook, Twitter and YouTube on the Israeli government’s behalf – without identifying themselves as government agents.

In 2011 the Guardian, a UK newspaper reported “The US military is developing software that will let it secretly manipulate social media sites by using fake online personas to influence internet conversations and spread pro-American propaganda.”