One of the photos of the BUK  enroute to its supposed launch location was made by an anonymous photographer  in Torez. The exact location is near a petrol station at 48.023969, 38.614448. On Google Maps the location is here.

The weather looks very nice. All blue skies. As the weather in the area became cloudy in the afternoon, could this photo be made around 12:30 in Torez at July 17?

Let us try to find out.

The view of the photo is roughly towards the northeast. We see an almost blue sky with lots of sunlight seeing the clear difference between shadow and non-shadow. This means likely there were no clouds in the path from the location of the sun towards earth.

Sun was almost exactly from the South at 12:30.

Previously the BUK was seen in Zuhres. The distance between two locations is about 24 km. The truck with BUK on a lowloader would require about 40-45 minutes to reach Torez from Zuhres at about 30 km/h.

To verify the weather conditions in Torez at around 12:30 we need more photos.

At 17 July around a convoy of tanks passed Torez from Donetsk. Two videos are published on Internet. These are made from the same location.
First this video. It clearly shows the sky was not completely blue over Torez.

Ukraineatwar calculated that this convoy was filmed between  12:30 and 13:30 local time. That is about the same time the BUK was photographed from the petrol station and next to Furshet market in Torez.

Ukraineatwar geolocated the location where these two videos were made. Here is the Google Maps link. 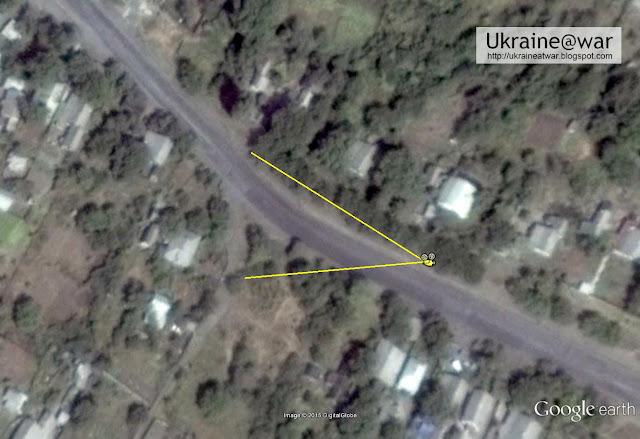 The image below shows the line of sight of both photos.

The red lines show the line of sight of the BUK photo made around 12:3o at the petrol station in Torez.

The green lines shows the line of sight for the videos made of the Vostok convoy between 12:30 and 13:30.

There is a Russia Today/Ruptly video as well made from the same location. It does show that there are no blue skies anymore.

Let us  have a look at the photos a NASA satellite made. NASA publishes photos of two satellites caled Terra and Aqua.

The photos of Terra are made a few hours earlier than photos of Aqua. Aqua made a photo of the area at around 09:55 UTC (or 12:55 local time). This image shows the trajectory of the aqua satellite on July 17, 2014.

Worldview allows to exactly pinpoint locations by looking at the latitude longitude locations in the rightlower corner of the window. I made a screenshot of the Aqua photo which was made at around 09:55 UTC \ 12:55 local time.

The area in the red lines show not show a heavy overcast sky. However there is a thin layer of clouds visible. The BUK photo however shows a clear sky.

On July 16 the weather in the area was very nice. No clouds to be seen as this photo shows.

There is another video showing the weather conditions in the morning of July 17. It shows the Vostok convoy on its way to Torez. The video at the end is made at a location 48.032127° 38.542169°. It is close to a small village called Hirne and about 2 km west of Torez.

The end of the video the camera moves toward facing the East. (direction Torez). It is clear there are already some high thin layer of clouds visible.

Michael Kobs estimated using shadows and sunclac tool that the convoy passed at aroud 12:45 local time. The Vostok convoy is about 40 minutes to a hour behind  the BUK convoy. This is confirmed by various tweets which report a convoy of three tanks between Shahtersk and Torez around 12:45. At 13:15 local time time Vostok convoy is seen in Torez according this Tweet.

So the screenshot below shows the weather situation around 12:30-12:45. The line of sight is facing towards the north- north-east.

Again there are some blue patches but here as well some high clouds are visible.

SAT24.com has several photos showing the weather above Europe. The photo does not show Eastern Ukraine in detail but the development of clouds at the end of the morning is clearly visible.

The four arrows in the left upper Google earth image are pointing to (from left to right) Donetsk airport, Grabovo, Torez, Saur Mogila.

The photo bottom left is made by teh Nasa Terra satellite. It shows the same situation as the photo taken at 8 UTC.

This is an image taken by the NOAA19 satellite at July 17 11:00 UTC. The arrow points to Torez.There is an area with fewer clouds visible.

This website has many satellite photos. This thread also has many photos.

Zoomed in on Torez the image looks like this

The preliminary report of DSB showed a satellite photo of the area. The photo was taken at 12:00 UTC . So we are looking at the situation at 15:00 local Donetsk time.

The original  image has been adjusted by adding Torez and the map below.

Novaya Gazeta reports that the BUK was delivered to an area near Torez-Snizhne in the night of 15-16 July.

While it cannot be excluded it seems unlikely the photo of the BUK was made at July 17. Satellite photos and videos all show a partly clouded sky. For 100% proof more photos from Torez facing towards Northeast are needed.

It is not unlikely the photo in Torez was made at July 16 as the weather had all blue skies at matches the Novaya Gazeta story.