298 innocent peope were killed by a BUK missile. They deserve we find out the truth based on facts.

An  article written by Dutch tv-maker Vincent Verweij published at Dutch crimesite.nl raised a lot of eyebrows. In the article published September 30 and titled “Vraagtekens bij het JIT-onderzoek naar MH17” (translated Doubts about the JIT investigation into MH17″)  the author describes many of his doubts about the scenario presented by JIT at the press conference on September 28.

This blogpost will show the article is full of errors and assumptions  instead of using logics and knowledge on facts.

Let me be clear: I am very much supporting journalists who are critical towards government and investigation team. However journalists should focus on the right subjects with critism. I have not read any critism by Dutch media on the Ukraine authorities for not closing the airspace. I have not read much critism on the acting by Dutch Government which is frustrating each and every attempt by press to obtain information.

I have also hardly seen any investigative journalism on MH17. There are a lot more critical questions to be anwered. Like what could be the motive for the shot down?

Indeed the Ukraine SBU which has both secret service and investigation branches has a reputation of not being reliable. This does not mean the evidence shown by JIT is unreliable. I made an overview of Ukraine lies here.

Verweij however completely ignores the many clear and proven lies by the Russian authorities. Why would Russia lie? Did Verweij think about that? Why would Russia only after 26 months present primary radar? I could go on and on but that would be out of scope for this article.

Remarkable about this article is that is was written by a Dutch freelance journalist who went to Eastern Ukraine multiple times to make tv items about MH17. This tv documentary for example was made by Verweij and aired at Dutch national tv on October 30 2014.

Verweij his critism is based on the JIT press conference at September 28. A few observations.

Lets analyse the article written by Vincent Verweij to show how wrong he is.

The  text below suggests that the BUK might not have come from the Russian Federation. Verweij states that the tapped telephone conversation is not a proof the BUK was brought in from Russia. The separatists talk about a line which is crossed. Verweij does not rule out that line is the border between Luhansk and Donetsk republic.

First of all JIT states it was able to reconstruct the route from the border to Luhansk based on several tapped telephone conversations. One of those was heard in the JIT press conference. See the JIT video here.

Secondly it is for me 100% certain Russia delivered the BUK TELAR. There are many similarities between the BUK photographed in Eastern Ukraine on July 17 and a BUK with number 332 en-route from its base in Kursk to the Ukraine-Russian border.

While JIT for a good reason did not reveal all, Verweij should have known better.

This Bellingcat video shows how well BUK 3×2 as seen in Russia matches the BUK as seen in Donetsk.

Next Verweij mentions that separatists might have stolen a BUK from an Ukraine Army base north of Donetsk. Verweij makes it look like it was confirmed the separatists indeed had a BUK. This has never been confirmed by anyi  investigation and in fact there is a not a single piece of public available evidence which provides the smallest indication the separatists captured an Ukraine BUK.

Verweij does not mention any evidence supporting his claim. In fact the quote from the Dutch Safety Board final report states the Ukraine BUKs were not operational.

Far more likely is that the separatists pretended to have stolen a BUK from that Donetsk base. However they used an old photo to prove that. Also the base did not have any operational BUKs. There was a BUK left however that was broken and missing many parts as various photos show. That particular BUK never moved from its position.
Blogger UkraineAtWar already in October 2014 reported about this story.

Next Verweij states that JIT did not show any evidence for the route of the BUK inside Russia. That is correct. If Verweij had a better understanding of the MH17 case, he would understand why. I will explain.

Update October 4: after I wrote this blogpost and Vincent made his comment, I learned about the most important reason Russia Federation was not mentioned as a suspect during the press conference. The prosecutor has not legal authority to prosecute states. The Dutch prosecutor can only prosecute individuals as Dutch newspaper NRC explains here. States can only be prosecuted in the European Court for Human Rights.

This is a highly sensitive criminal investigation. Russia doubted each and every conclusion so far. Not a single leader, not Mark Rutte, not the EU, not the NATO, blamed Russia for the shot down of MH17. That may sound weird but check out the press releases in this blogpost.

Addionally the press conference was not on mentioning suspects and their origin. It was about the weapon and launch location.

JIT simply leaves some room for Russia to cooperate. By directly putting the blame on Russia , Russia is likely to completely refuse to cooperate.

Next Verweij doubts about the escape route taken by the Volvo with the BUK TELAR on the lowloader after the shot down. According  JIT the Volvo drove from Pervomaisky  via Debaltseve and Luhansk back to Russia. That is a big detour. According to Verweij “absolutely not credible”.

To understand, lets first see the route taken by the convoy in the early morning of July 17 to reach Pervomaisk. After crossing the border it went likely via Luhansk and via Yenakiieve to Donetsk. In Donetsk it  drove a few miles into the city, turned around, was parked at a busy road and then went eastwards towards Pervomaisk. A totally non logical route as well. The public does not know the reason for this detour. My explanation is that it was meant to show the BUK was stolen from the Donetsk army base north of Donetsk. Maybe the separatists wanted to show off they had a BUK so the Ukraine Air Force was afraid.

Another reason for this route was that it was through separatists controlled areas. The shorter route south of Snizhne to and from the border was not controlled by separatists. In fact there was heavy fighting on July 16. For sure not a safe route.

Last but not least, the reason for a detour are bridges and other low obstacles which prevented the lowloader and BUK to cross. This crossing shown in the image  is located between Donetsk and Torez. The BUK on lowloader could just have fitted under the bridge.

The map of the route the BUK transport took in the afternoon and evening of July 17/July 18. 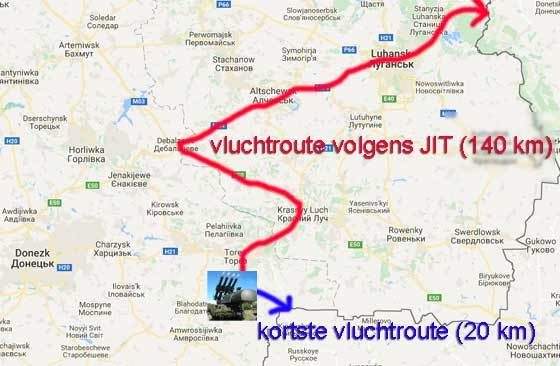 Next  Verweij states the area of Luhansk which the BUK transport crossed was on the morning of July 18 controlled by Ukraine. Verweij based his believe on maps. Maps are not reliable. There is a lot of discussion on the Luhansk video. For now I am not going into detail about this.

Next argument of Verweij is the location of telephone conversations as shown by JIT misses Luhansk. Verweij doubts if the transport was there at all.

The reason JIT did not show Luhansk on the map is simple. JIT was not allowed by the Luhansk Republic leaders to investigate the telephone towers in Luhansk. the Netherlands largest newspaper Telegraaf reported about the obstruction of the criminal investigation in August 2015.

Despite the fact that I provided that Telegraaf article in an email to Verweij he choose not to add this to his article.

In his conclusion Verweij states that the JIT statement about the BUK being  delivered by Russia has not been not well-founded.

Verweij forgets his was listening to a press conference, not a court case. Judges want a smoking gun according Verweij. True, but we did not see a court case.

This is a bad piece of work by a main stream media journalist who makes documentaties for Dutch television. Verweij should have done his homework and should have thought a bit better about publishing. And he might have written the intension of his article a bit more clear.