In a series of posts I will discuss the different opinions of DSB versus Almaz Antey on the location of where the BUK missile was launched from and where it exploded.

Basically DSB states the missile came from an area of 320 square km in size. The missile more or less approached the aircraft head on.

Almaz Antey states the missile came more or less from a south-southeasterly direction (when viewed from the aircraft).

The damage of the aircraft shouldprovide us an indication where the missile exploded.

The warhead of the missile is located behind the nose and behind the electronics like radar and proximity fuse. In the image below the warhead is indicated in black.

The warhead contains the steel elements which are used to destroy the target. Explosive is located in the core of the warhead. When the explosive explodes, the fragments are distributed in a kind of kone shaped cloud. The exact damage pattern on the target depends on parameters like missile speed, angle to target, target speed and density of air.

The image below shows the fragmentation pattern.

The small shrapnel will be distributed more or less sideways, down and up. (indicated with 1 in image below)

The remains of the missile body in front of the warhead, the remains of nose cone and electronics will be pushed ahead. (2)

So it is logical to assume the damage of the target ahead of the trajectory of missile has larger holes than the damage located on the side of the missile.

Distribution of fragments when missile launched from Snizhne

This image provides an indication of the distribution of shrapnel when the missile was launched from Snizhne.

The two areas to the side of the missile indicate the shrapnel cloud.

Mind this is a not a 3D model. Fragments are also spread out in a 360 degrees direction.

So the image can be misleading

DSB about the engine intake ring

At page 25 of the Appendix X some interesting remarks are made.

So NLR here basically states that only 5 holes could have been caused by a fragment from the warhead. They did not have enough kinetic energy to penetrate the back plate of the engine ring.

Remind this number of 5!

In Appendix Y written by TNO the damage to the left wing and engine caused by a missile should be begligible.

A closeup of the left engine intake ring can be seen here and here.

This is a picture showing the back of the ring.

At page 60 of the final report, DSB only mentions the location of holes in the engine intake ring. DSB does not state anything about the size nor the amount of energy what must have caused the damage.

The ‘over a dozen’ is remarkable low as NLR wrote that on the engine intake ring alone were 47 penetrations.

At page 124 of the DSB report, DSB states something about the size of holes in intake ring and wings. DSB states the perforation holes in engine intake and left wing tip were significantly larger than those found in the wreckage of the cockpit.

DSB failed to document part of the engine cover

In February 2015 a photo was published on a Russian forum showing a part of a  Boeing 777 engine cover. The part is very likely of the left engine and it shows what looks like small damage caused by shrapnel.

However, this part is not documented in the DSB final report. Also Almaz Antey did not mention it in the presentation of October 13, 2015.

This part of the engine cover was found north of Petropavlivka 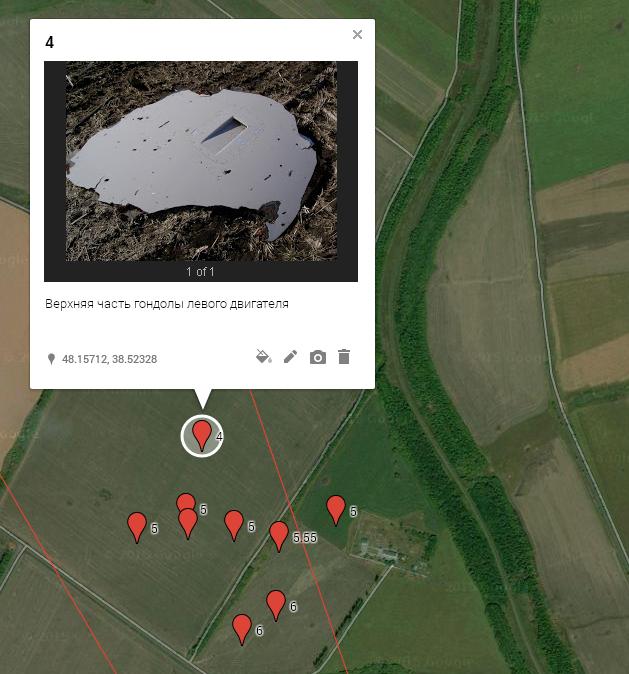 The left engine was more than 20 meters located from the position where the missile exploded. The kill range of the BUK warhead is about 17 meters. However, the fragments were able to penetrate the engine forward nacelle (DSB calls this the left engine intake ring) . Also there are many small entry holes on the engine nacelle which indicates that these are caused by fragments of the warhead. The nacelle is made of robust material and only high kinetic fragments could be able to penetrate it.

<needs verification> I understand Almaz Antey states that all holes size 6-14 mm of the left wing and engine intake ring are caused by ricocheting of fragments which hit the cockpit area first.

The reason the engine intake ring is made of more robust material is to make sure it does not get damaged by for instance birds hitting the engine during takeoff and landing.

This video made in November 2014 during the recovery shows the lefthand engine nacelle. It clearly shows exit holes as well.

The two photos below were part of the October 13, 2015 presentation of Almaz Antey. It shows many relative small holes.

This photo shows damage to the left wing.

Now look at the engine intake ring as photographed by Almaz Antey. While there is no ruler available, at the first sight it appears to be far more than just 5 penetrations sized 6-14 mm.

If the measurement of Almaz Antey is correct, at least one killing fragment penetrated the back plate. The ruler in black can be seen.

Mind the exit hole is wider than the entry hole. The photo is facing the back plate of the engine intake ring.

This slide shows the damage to the left engine intake ring.

Almaz Antey had a BUK 9M38M1 equipped with  9N314M warhead missile explode in a test setup. The target was the cockpit of a IL86 aircraft. The test simulated a missile originated from a location near Snizhne. This is the scenario which DSB calculated.

The video about the test is here.

The issue with this test is that it tests a static situation. Both warhead and cockpit do not have movement. Additionally the air density is much different than at 10km altitude. I am not sure what the effect of these different conditions are.

Also DSB calculated the angle of the missile relative to the horizon was about 10 degrees. (nose up).

Almaz Antey test setup was done with an angle of 22 degrees nose up. So the result of this much higher value is that secondary fragments (nose-cone, electronics, body of missile) does not hit the engine and left wing but will fly over it.

Additionaly MH17 engine was running and thus sucking air into the engine. This would likely result into fragments being sucked into the engine and hit engine intake ring.

The test showed that the left engine was not hit by fragments.

Almaz Antey also showed a photo of what DSB calls  ‘secondary fragmentation’. These are the remains of the missile nose-cone, electronics, body, rocket engine etc.

The photo clearly shows these are rather large remains, These cannot have  caused the small holes as observed in the MH17 left engine intake ring.

One of the causes of the damage to the left engine intake ring could be ricochet. It could be shrapnel that hit the cockpit or forward fuselage ricochet on the fuselage and hit the intake ring and the engine cover.

I do not remember having read this scenario in the DSB report.

Based on the Almaz Antey provided photos of the damage to the left engine intake ring, the DSB conclusion that “perforation holes in engine intake and left wing tip were significantly larger than those found in the wreckage of the cockpit” does not seem to be right.

Also the fact that DSB did not mention the damage to the  engine cover onthe righthand side of the left engine  is strange.

Additionally, there are more holes sized 6-14 mm in the intake ring than the 5 stated by NLR.

However the test performed by Almaz Antey is far from being executed under the same conditions as MH17 was shot down.