MH17 was most likely destroyed by a BUK surface to air missile. The two locations from which the BUK missile could be launched are Snizhne (according the Western press) and Zaroshens’kye (according the Russian press).

A Snizhne launch is backed by photos released in social media of the BUK launcher and a photo of what could be the smoke trail minutes after the launch.

However these photos and videos all have  a suspicious smell around it.

Another clue provides the reconstruction site in the Netherlands. Severall photos provide an indication of the state of the investigation. For example this photo. It shows the port /left wing and left engine nacelle. The right engine nacelle was initially not collected by the DSB recovery team and ended in a warehouse in Ukraine.

This post will show  locations of the aircraft where damage appears to have come from the front of the aircrat. This means the missile was launch from a location south of MH17 and rules out Snizhne.

The locations which have front facing damage are:

Many thanks to the contributors of the Metabunk thread here. Especially user Ole was able to identify many parts of the aircraft.

According Almaz Antey the missile exploded right in front of the cockpit window of the captain. I did a lot of research and agree with this conclusion!

The red Plus sign shows the location of the explosion. The numbers refer to the damage. 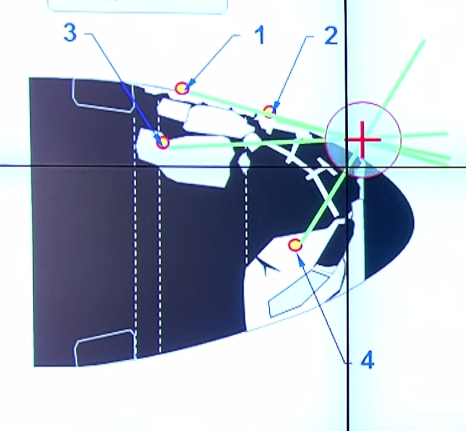 Mick West, moderator of the website Metabunk.org created a modeling tool which allows to calculate the distribution cloud containing the fragments of the missile. This thread has some great information and discussion.

The latest version of the model is here. Please check out the thread at Metabunk.org frequently as the model is adjusted by Mick West on a regular base.

When the BUK missile was launched from Snizhne the distribution of fragments looks like below.The small blue circle with the cross is the missle warhead. The black circle is the range of the proximity fuse. The orange area is the cloud of fragments.

When the missile was launched from an area near Zaroshens’kye the distribution of fragments would look like the picture below. The left wing and engine would be damaged.

Also fragments would enter the cockpit in an allmost straight line parallel to the longitudinal axis of the aircraft (running from nose to tail).

Damage with a Zaroshens’kye ‘signature’.

The difference in damage when a missile was launched from Zaroshens’kye or Snizhne is the damage of the wings. After the aircraft was hit, the cockpit and part of the forward fuselage was separated from the rest of the aircraft. Also parts of the engine (the ring on the front) and the engine nacelle were separated. These were found near  Petropavlivka. This is West of the area where the cockpit was found and even further to the West of the spot when the main fuselage was found.

It is important to determine which engineparts were found near Petropavlivka.

Based on the fact that the fuselage made a left turn after MH17 was hit by the missile, the most obvious is that the LEFT engine was hit by fragments. It then stopped operating while the right engine continued to provide thrust. As the FDR (Flight Data Recorder) stopped recording data after MH17 was hit we know nothing about engine statistics after the impact of the missile.

With one engine still operating (the right) a left turn is very likely.

This theory can be confirmed by photos.

Various parts of the aircraft show damage which indicate a missile lauch from Zaroshens’kye.

On the image presented by Almaz Antey this is indicated by the number 4.

There are severall scratches on the roof of the cockpit. They all seem to originate from the same location. 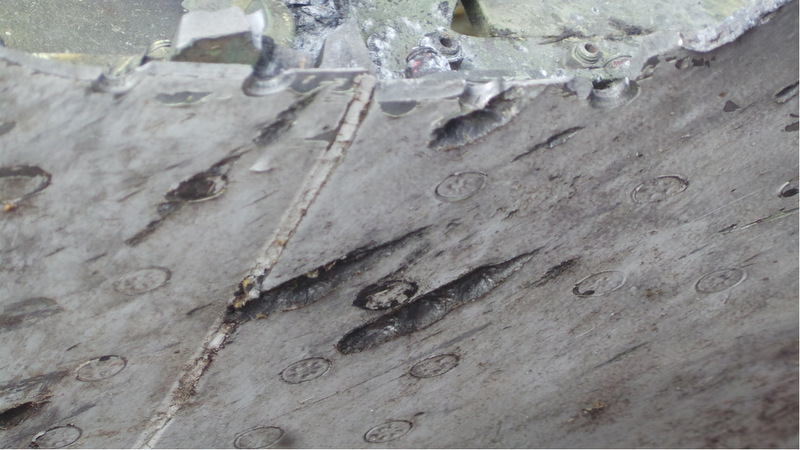 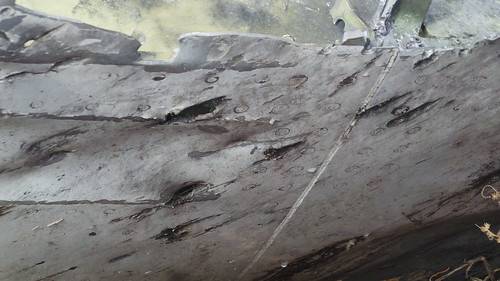 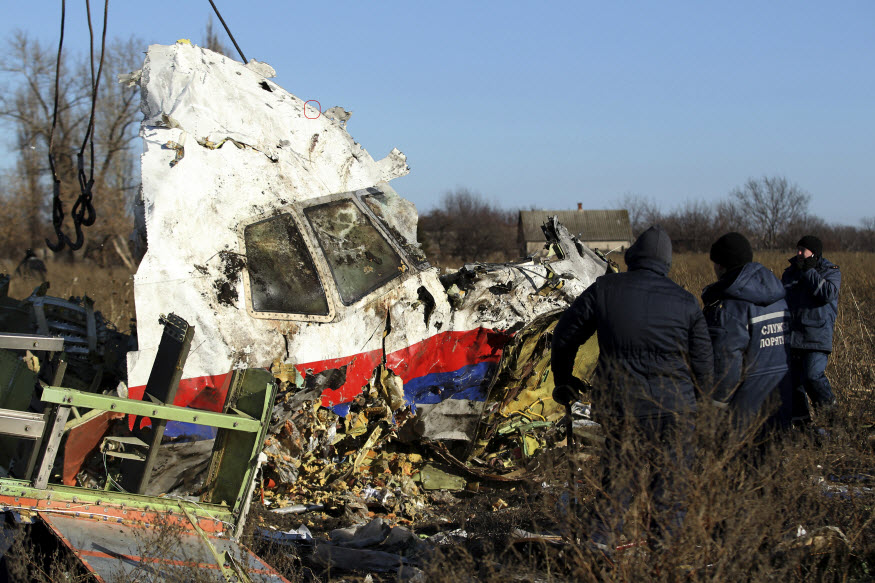 And this is how it looks like in the reconstruction 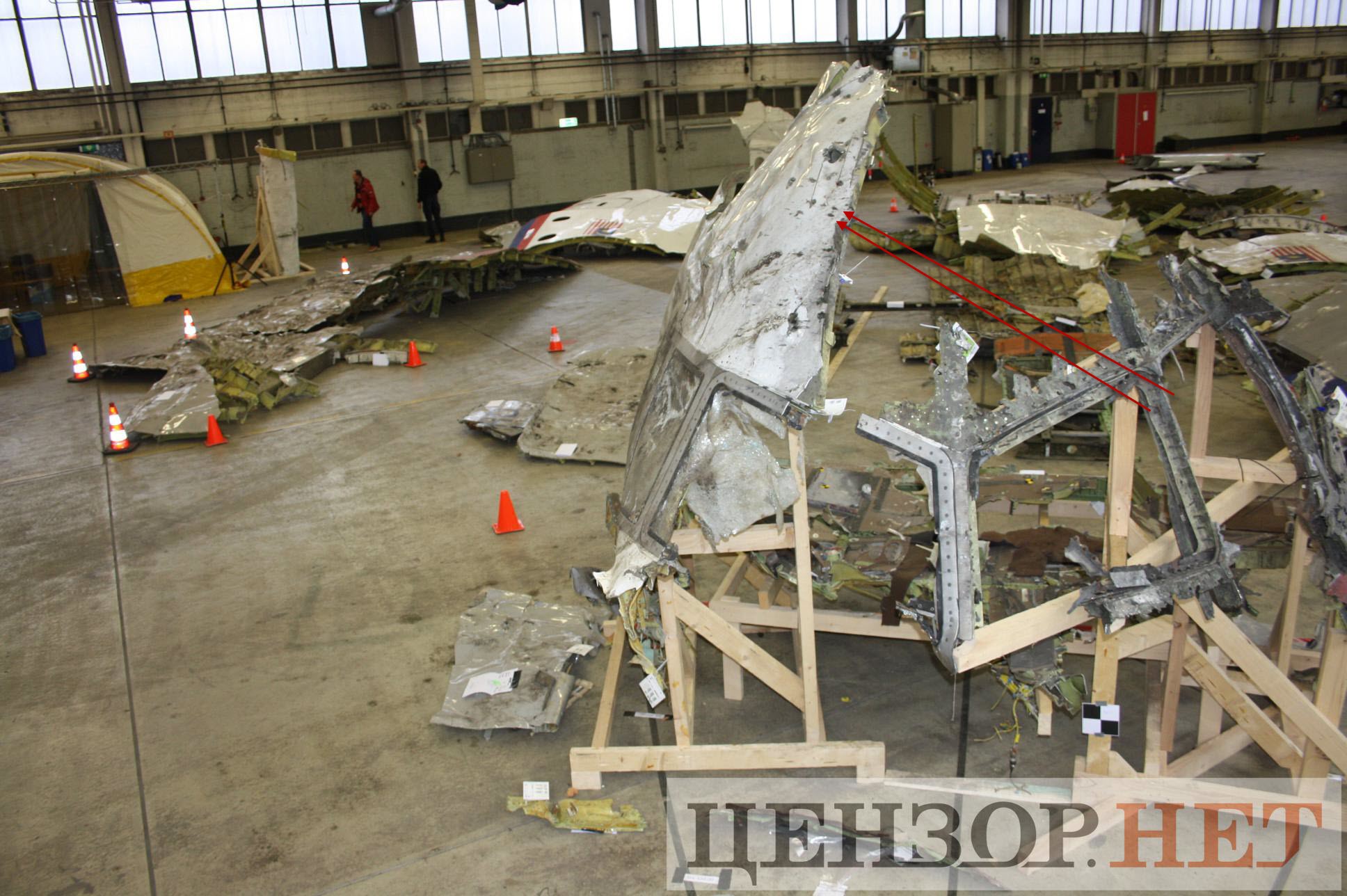 This photo below shows a part of the Rolls Royce Trent engine. It has a sort of air inlet. This inlet is located on the upper right part of the engine nacelle. Both the left and right engine have this inlet on the exact same location. (original photo here)

Although not easy to judge for a non-expert on ballistics the  damage seems to suggest a fragment trajectory parallel to the longitudinal (nose to tail) axis of the aircraft.

This supports a launch from Zaroshens’kye. When the missile was launched from Snizhne the damage would be more running from top of right engine to the right (cross the engine).

Also there is damage to be seen on the left of the photo (left of the air inlet). If the part was part of the left engine. it would be almost impossible to reach from fragments when the missile was launched from Snizhne.

The red box on photo 2 shows the inlet on an Rolls Royce Trent engine mounted on the left wing.

The same inlet as seen on an engine mounted on a right wing.

The next photo shows another part of the engine nacelle. (original photo here) . It shows some sort of spoiler. The Rolls Royce Trent engine has a spoiler which is located on the rightside for the left engine and on the leftside of the right engine. See the blue box at photo 2.  It shows damage running parallel to the horizontal axis (nose to tail)of the aircraft. Again this damage indicated a missile from Zaroshens’kye. (clear picture showing spoiler here)

The ring in front of the engine was damaged by fragments as well. It is hard to determine if the engine ring ( nacelle) is part of the left or right engine. The video was made near Petropavlovka where other parts of the engine were found as well. Looking at the damage it is most likely the left engine.

A large photo of the nacelle showing damage can be seen here. The photo was made in the Netherlands.

This video shows the engine front ring around 4 minutes into the video.

All large photos taken at the hangar are here.

Parts of the ring of the other engine were initially not recovered by the Dutch! This post shows various photos of an engine nacelle stored somewhere. It is not seen in the reconstruction hangar in the Netherlands.

Here the hole can be seen on an American Airlines B777-200 engine. American uses the Trent 892 engine as well as Malaysian Airlines on its Boeing 777-200 fleet.  It is hard to see in this video but the black circle looks like the hole.

One of the nacelles (I assume the same one as seen on the video) was recovered and transported to the Netherlands. The nacelle can be seen here in the hangar used for reconstruction. Mind the left side shows the letters OINT. This is of ‘mount point’ which can be seen on the engine printed at various places. This proves the position of the nacelle is the correct one. See this picture of a similar Rolls Royce engine (but not used on B777).

This photo was taken in the first couple of days after the disaster. It shows the same lefthand side engine ring in a maize field upsidedown.

The hole in the picture from the maize field is the same as the one at 10 o’clock in the hangar. You have to go 5 sections to 9 o’clock and there is a double crosspiece. Two sections above the hole (11 o’clock) there is a section with soot. The part in the maize field has the same features.

The original photos are here. 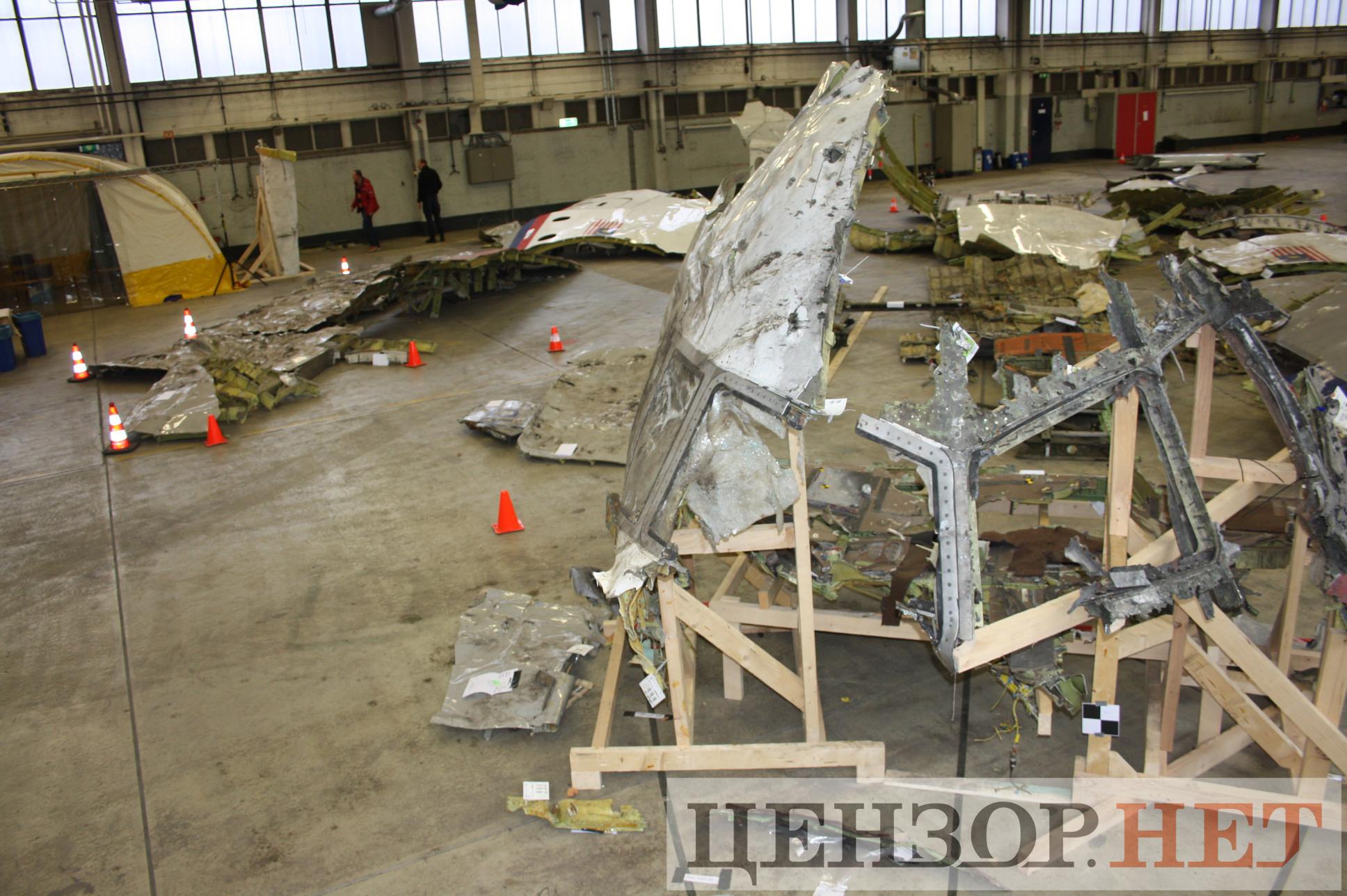 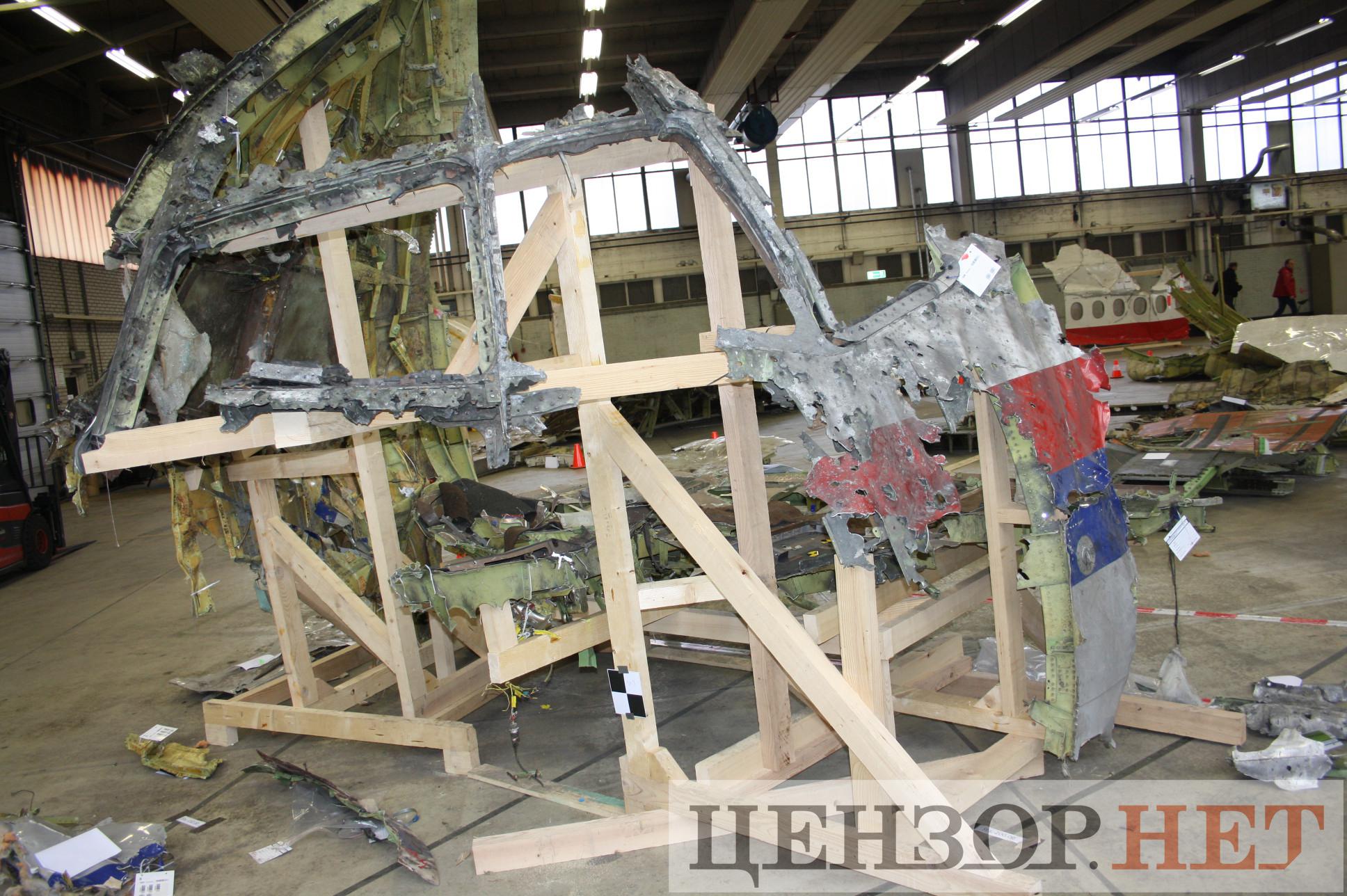 The Boeing 777 has two jumpseats in the cockpit. These are located roughly behind the seat of the co-pilot and behind the center console.

A vertical piece of the left jumpseat was photographed. It has clear holes caused by fragments which are running horizontally. The photo below shows the headrest.

The top of the headrest  is on the rightside of the photo. Original photo here. 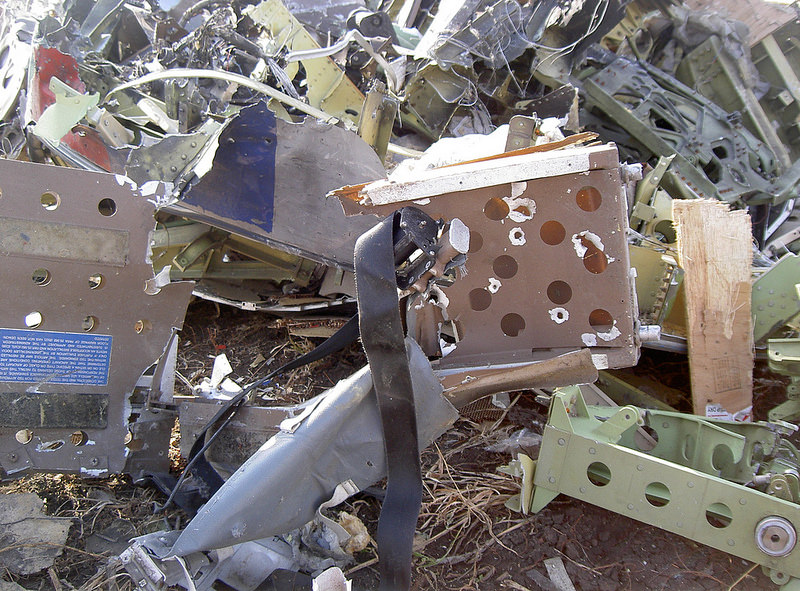 Here the headrest as seen in the cockpit 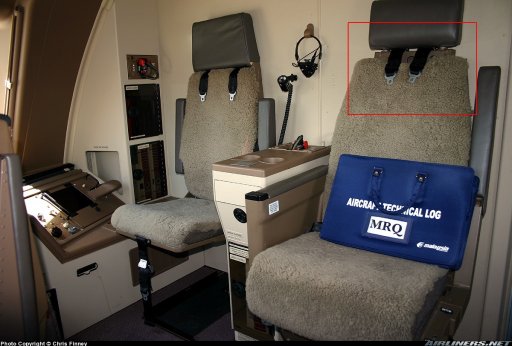 Angle of attack sensor  area on lefthand side cockpit

Several photos were made of the area near the angle of attack sensor (AOA).  Again several holes which has a horizontal trajectory. So the explosion looks to be in front of the aircraft.

Damage to the probably the forward belly also matches an explosion of the missile launch from  Zaroshens’kye. The picture below shows the lower area (the belly) of the fuselage located just behind the cockpit. The photo was made at the location where the cockpit + forward fuselage was found.

While I am not 100% certain the area is indeed the lower part of the fuselage. the holes again are running from the nose to the rear of the aircraft.

The original photo is here.

One of the pilots seats

These photos shows the seat of one of the pilots. It is for sure a seat in the cockpit as the label on the seat reads ‘Ípeco’. Ipeco is a manufacturer of pilot seats. (original photo here)

The photo below shows the seat of the captain. This seat was located on the lefthand side of the aircraft. The seat was found in the sunflower field a few meters from the cockpit debris. The seat was later moved closer to the cockpit and some parts were removed.

The original photo is here.

Here is another photo of one of the pilot seats This is the seat of the captain

this plate with a large hole in the middle and 4 holes around it looks like to be the lower front of the seat (original photo). See this image of a Ipeco seat. Body of one of the pilots

The body of the first officer was found still strapped in his seat at the location where the cockpit crashed. Three larges holes can be seen in this belly. It seems the fragments entered his bodies from a location in front of the cockpit.

The photo can be seen here.

This part was found near Petropavlovka. It shows a piece of the cockpit. It is located behind and left of the captain seat. The original photo is here.

It is very difficult to determine if the damage on this piece was caused by fragments and if so, what direction the fragments came from.